The Department of Homeland Security is planning “expeditious” repairs to large gaps in the southern border wall — more than a year after The Post first reported on a breach in the frontier fence that was allowing smugglers and migrants to cross with ease into the country.

A recent press release from the Department of Homeland Security called the repair work “a top priority” for the federal agency that oversees US Customs and Border Protection (CPB), which deploys hundreds of agents across the length of the nearly 2,000-mile frontier with Mexico. “DHS will move as expeditiously as possible,” said the Tuesday release, which is attributed to DHS Secretary Alejandro Mayorkas.

In Sept. 2021, The Post reported on a 20-foot gap in the border fence at Border Monument Three — one of the 276 original markers erected after the Mexican-American War in 1848. The unfinished section remained after President Biden called for an immediate halt on the construction of the 30-foot high border fence when he took office in January 2021.

Now, 15 months later, “CBP intends to prioritize remediation projects needed to address life and safety issues — including the protection of individuals, USBP Agents and nearby communities from potential harm,” the DHS release says.

Included in the “remediation projects” is the gap that The Post first pointed out, as well as repairs throughout some of the busiest border crossing points at El Paso in Texas and the Yuma Sector in Arizona.

“Work within the El Paso and Yuma Sectors will include closing small gaps and installing incomplete gates, including seven open vehicle gate gaps in the Yuma Sector and one monument gap in the El Paso Sector,” the press release says.

The DHS press statement came just a few days after this reporter was barred from a “ride-along” next week with Border Patrol agents in the El Paso Sector in the coming final days of Title 42, the Trump-era pandemic policy that had allowed border agents to send migrants back to Mexico. That policy is set to expire Dec. 21.

Reporters are regularly embedded with Border Patrol agents for an up-close glimpse of the obstacles faced by federal agents in dealing with the historic flow of migrants at the southern border.

“I have some bad news for you: Washington said no. There’s nothing we can do,” a local US Customs and Border Protection spokesman in Texas last week told The Post after a ride-along was requested.

DHS did not provide a reason for the ban. Calls to DHS and the White House seeking comment were not returned last week.

In June 2021, Biden pulled more than $2.2 billion in funding that Trump had set aside to complete construction of the barrier along the southern border with Mexico amid an escalation of migrant crossings.

Desperate to stem the migrant flow at the mountainous and remote site, which sits at the confluence of Texas, New Mexico and the Mexico border, Border Patrol Agents took it upon themselves to plug the hole. They welded together pieces of stray construction materials, including old truck tires, that were left to gather rust along the southern border when construction was halted.

In fiscal year 2022, more than 2.76 million migrants crossed into the US from Mexico, according to statistics compiled by US Customs and Border Protection. With the imminent end of Title 42, thousands of migrants have been crossing into El Paso from Mexico in recent days. That number could spike by 40 percent if the Title 42 comes into effect next week, authorities say. 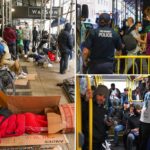 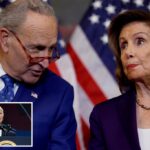 Schumer and Pelosi give their blessings to a Biden 2024 run