​Hillary Clinton is “dusting off” her husband’s playbook by criticizing the Biden administration’s “open borders” to put herself in place to mount a 2024 presidential run, veteran political consultant Dick Morris said in a new interview.

Morris, a former aide to President Bill Clinton, said Hillary is setting herself up to enter the race as a “moderate” choice for Democrats in two years for what would be her third shot at the White House.

“I see more and more signs that Hillary’s going to run,” Morris told John Catsimatidis on his WABC 770 AM radio show in an interview that aired Sunday​, noting that she has been remarking that Americans “do not believe in open borders.”

“These are all signals that she is going to be the moderate candidate for president. She’s going to say after the election, ‘See, the left cost us the House and the Senate. If we stay with a left-wing candidate in 2024, we’re going to lose the White House. I’m the only one who will tack to the center and give us a chance at victory​,​’​” Morris said.

Morris said he’s aware of the strategy she’s employing “because it’s the strategy I designed for Bill Clinton in 1992” when he won the Democratic nomination.​

“​Hillary is just dusting off Bill‘s playbook that I wrote for him and applying it herself this year,” he said.

The former secretary of state and senator from New York during an interview on MSNBC last month called out Florida Gov. Ron DeSantis for flying migrants from Texas to Martha’s Vineyard, alleging the Republican was engaging in human trafficking.

“So many other Americans — I happen to believe still the majority of Americans — are good-hearted and generous and when people end up on their doorstep in need, they’re going to respond. They’ll feed them and house them and the kids in the AP Spanish class will be let out of high school so they can go and translate. That’s the kind of American spirit that we try to celebrate at the Clinton Global Initiative,” she said on MSNBC on Sept. 16, adding “nobody wants open borders who has any idea of how government and countries work.”​

Morris was building on comments he made to Catsimatidis on last week’s show when he predicted that Democrats will ditch President Biden in favor of Clinton over fears a more far-left candidate could end up nominated.​

“Once Biden pulls out, the polling will show that the Democrats are leaning toward some crazy radical like Gavin Newson, Bernie Sanders. Maybe even AOC herself,” Morris ​said, referring to progressive lightning rod Rep. Alexandria Ocasio-Cortez.

​“That’s going to drive the Democratic Party leaders to go to Hillary and say, ‘Hey look. Please run again. We need you to save us from the crazy left,” ​Morris said.

“Otherwise we’ll have Sanders as our candidate. We’ll lose Congress by a ton. And we’ll get wiped out in the presidential race.’”

Clinton ran in 2008, but lost the nomination to former President Barack Obama. She lost the 2016 presidential election to Donald Trump. 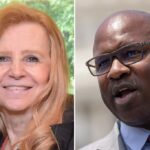