The FBI has identified the deceased woman who was found wrapped in a trash bag off Florida’s Gulf Coast last weekend and are now calling her death “suspicious.”

Heather Rose Strickland, 34, was the woman who was found floating Saturday off Egmont Key at the mouth of Tampa Bay, the FBI’s Tampa Field Office said.

“The FBI is asking the public to assist with any information that helps law enforcement piece together the events that led to Strickland’s death,” it added.

The body of Strickland was first found by fishermen operating in the area.

Witnesses said they were spearfishing when they went for a dive. As they headed to the next spot, they found the trash bag. They tried to pick it up but quickly realized it was not trash.

After cutting the plastic and canvas bag that was inside, they said they saw skin and what was believed to be a bra strap or bikini. The witnesses said they made the distress call shortly after the discovery.

“The body was found wrapped in bedding in a plastic trash bag,” the FBI said, noting the discovery happened 13 miles off the coast.

The FBI described Strickland as being around 5 feet 5 inches tall, with “a tattoo on the right side of her neck of ‘B’ and ‘E’ written in Old English Script and a Rose tattoo on the outside of her right thigh.”

The FBI is the lead agency looking into the incident since the body was found in federal waters. 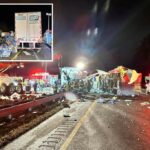 40,000 pounds of meatballs spill onto Virginia highway after tractor-trailers crash 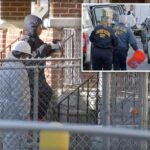