Dozens of people were injured when a Hawaiian Airlines flight from Phoenix to Honolulu hit severe turbulence Sunday, officials said.

A total of 36 people needed medical attention and 11 were in serious condition after a wobbly flight rocked the cabin and left the plane’s interior visibly damaged, according to the Honolulu Emergency Medical Services director.

Patients suffered cuts, bumps and bruises including head injuries, while some suffered nausea and vomiting due to the bumpy flight.

Three flight attendants were among the injured taken to hospitals. There were 10 crew members onboard and a full cabin of 278 passengers.

The airline hasn’t seen “an incident of this nature in recent history,” he said.

“We are also very happy and we feel fortunate that there were not any deaths or other critical injuries. And we’re also very hopeful that all will recover and make a full recovery,” Ireland said.

The seatbelt sign was on at the time, but not every passenger had theirs fastened.

One passenger, Kaylee Reyes, who was flying with her mother said her mom had just sat down after using the restroom and didn’t have a chance to buckle her seat belt when the turbulence first began.

“She flew up and hit the ceiling,” Reyes told Hawaii News Now.

A thunderstorm advisory was in effect for areas including Oahu and the plane’s flight path at the time of turbulence, according to Thomas Vaughan, a meteorologist at the Honolulu outpost of the National Weather Service.

Snook said the airline was aware of the advisory, but the patch of air where the flight got bumpy didn’t show any warnings of danger.

The phenomenon could have been an instance of “clear-air turbulence” that happens in cirrus clouds or sometimes clear air near thunderstorms, rather than in the storms themselves. The differences in temperature and pressure create powerful currents of fast-moving air, making clear-air turbulence the most dangerous type of turbulence.

Pilots can fly straight into clear-air turbulence without warning.

The flight began its descent immediately after the turbulence and the crew declared an emergency, alerting people on the ground that they had a number of injuries onboard. Air traffic controllers then cleared the way for the plane, giving it priority to land.

It’s unclear how much altitude the plane, an Airbus A330-200, lost during the turbulence, but the National Transportation Safety Board would be looking at that and more in an investigation of the incident, Snook said.

The plane’s flight data recorder would be able to provide that detail and more. The board will also investigate what passengers and crew were doing at the time of the disturbance — including what measures were taken to ensure passengers had their seatbelts on.

“If you don’t have your seatbelt on, you stay where you are as the aircraft goes down and that’s how … injuries occur,” Snook said. 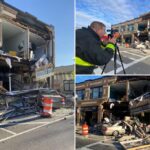 Massachusetts building’s facade crumbles after car crashes into it 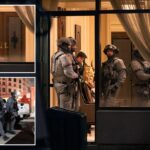