The images were included in an envelope of other photos and reports presented to the 12-member jury in a private room at Los Angeles Superior Court.

The array of documents was submitted as an exhibit in Weinstein’s trial over 11 counts of rape and sexual assault involving five women between 2003 and 2014.

The convicted pervert’s private parts are at the center of Weinstein’s latest trial.

The disgraced film producer sustained scarring and alterations in his genitalia from a 1999 surgery to remedy Fournier’s Gangrene, prosecutors said. Doctors removed some of Weinstein’s scrotum and placed them into his thighs.

His lawyer grilled a victim Wednesday for supposedly lying about Weinstein’s testicles and forced her to go into detail on their appearance. The unnamed victim, who alleges she was assaulted in 2013, told jurors Weinstein had “problems with testicles” and that they were “part of him,” the Daily Beast reported.

The images were presented just one day after a “Dirty Dancing 2” actress testified that Weinstein masturbated on her face in 2003 while his assistant waited outside a hotel room after demanding she give him a “naked massage.”

The then-22-year-old said Weinstein shoved her onto the bed, but never saw Weinstein’s genitalia. 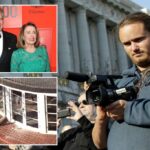 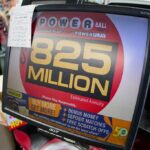