Mixed messaging. A Los Angeles jury has found disgraced media mogul Harvey Weinstein guilty of two counts of rape, but acquitted him on the charges of sexual battery. The Monday, December 19, decision firmly cements his status as one of the most high profile producers to face prosecution in a post #MeToo world.

The California-based lawsuit revolved around the testimonies of four accusers, whose experiences with Weinstein ranged from sexual assault to rape, between the years of 2004 and 2013. Also pressing charges in this case was Jennifer Siebel Newsom, a filmmaker and first spouse of the state of California. Their testimonies were supported by four additional accusers – who did not bring charges forth in this particular case – as well as 44 witnesses. The former producer pleaded not guilty to all the charges brought against him.

Weinstein, 70, was present in the L.A. courtroom with attorneys Mark Werksman and Alan Jackson as the verdict – which was reached on the 10th day of deliberations – was read. He did not testify as part of the trial. The guilty verdict was reached after the four accusers, all known as Jane Does by the legal system, recounted their experiences with the former media mogul. The jury spent about 41 hours considering all sides of the case in question.

In their defense of Weinstein, Werksman and Jackson attempted to discredit the accusers, asserting that Jane Does one and two lied about their encounters with Weinstein, while Jane Does three and four had “transactional sex” with the producer in the hopes of securing professional opportunities within the film industry.

Previously found guilty of sex crimes in the New York legal system in 2022, Weinstein has already served two years of a 23-year sentence. He will likely be sentenced based on today’s guilty verdict early next year, and is required to finish his prison sentence before starting his California-based incarceration.

The most recent development in Weinstein’s legal battle comes about a year and a half after finalizing his divorce with his wife of nearly a decade, Georgina Chapman. The couple share daughter India, 12, and son Dashiell, 9. The once-lauded producer is also the father of adult children Lily, 27, Emma, 24, and Ruth, 20, who he shares with ex-wife Eve Chilton.

Of her difficult experience navigating the accusations made against Weinstein, Chapman told Vogue in May 2018, “It was difficult because the first article was about a time long before I’d ever met him, so there was a minute where I couldn’t make an informed decision. And then the stories expanded and I realized that this wasn’t an isolated incident. I knew that I needed to step away and take the kids out of here.” 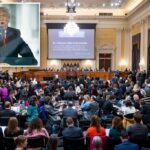 ‘What doesn’t kill me makes me stronger’ 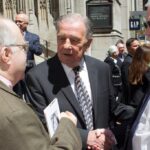