Prioritizing family. Gwen Stefani and Gavin Rossdale‘s marriage may have ended in divorce, but the musicians have proven that their kids always come first.

Gwen and Gavin first met in 1995 when her band, No Doubt, and his band, Bush, were both performing at an event for the radio station KROQ. The pair went on to date for several years before they tied the knot in 2002.

​​In 2005, The Voice judge announced that she and Gavin were expecting their first child together. They welcomed son Kingston in 2006. The pair went on to welcome two more kids, son Zuma in 2008 and son Apollo in 2014.

Gwen and the “Adrenaline” rocker split in 2015 after nearly two decades together. After filing for divorce in August 2015 over “irreconcilable differences,” Gwen and Gavin’s divorce was finalized by April 2016.

Both singers have found love with other partners since their split. The California native moved on with Blake Shelton, whom she met on The Voice in 2014 when they both served as coaches. Romance rumors began to circulate when the pair were spotted spending a weekend together after they had both ended their marriages by the end of 2015. Their romance was confirmed in November 2015 when the “God’s Country” singer’s team told multiple media outlets that they’re a romantic item.

Gwen and Blake’s romance has been going strong and they got married in July 2021.

Meanwhile, Gavin is currently in a relationship with Courtlyn Cannan. The actress clearly gets along with Gavin’s kids and enjoyed a double date with Kingston and his girlfriend, Lola, in May 2022.

The coparents appear to be on good terms, with Gavin previously admitting he has nothing but love for Gwen. “I just always want her to be happy,” the “Love Remains the Same” singer exclusively told In Touch in 2019.

“You know, we both manage to feed them and get them to school on time, more or less!” he joked of how they’re raising their sons. “They are doing really good. They’re really happy, and that’s it. We’re doing the best we can.”

However, the pair didn’t always have the best relationship after their split. In July 2016, Gwen referred to their separation as “hell” while posing on the cover of Harper’s Bazaar.

“Like six, seven, eight months of torture, trying to figure out this big secret,” she said, adding she wouldn’t confirm or deny rumors that Gavin had cheated during their marriage for the sake of their sons. “As a famous person, you start to think, ‘I can’t say all that because I’ll embarrass them or hurt them in some way. And especially now because they can see everything and hear everything,” she continued. “It was so insane because not only did my family break up, but then my kids are taken away like half the time, so that was really like, ‘What?! What did I do?’”

Since their split, the exes have publicly kept their distance from each other with the exception of attending events to support their kids. Keep scrolling to see some of Gwen and Gavin’s rare coparenting moments. 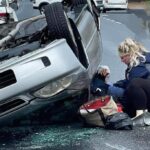 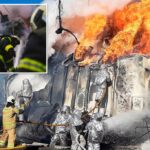