The dramatic police video includes the sound of bullets flying and a woman hysterically screaming in the background while police Officer Alec Iurato, who is already wounded by cop killer Nicholas Brutcher, limps around the side of the attacker’s Redstone Hill home, gun in hand, as he radios for backup.

“Officer shot, officer shot,” he says, grunting in pain on the video.

Bristol Police Sgt. Dustin Demonte and Officer Alex Hamzy already lay dead or dying after Brutcher ambushed the cops from behind, according to the video released Sunday by the Connecticut Office of Inspector General.

The IG’s office said Brutcher fired more than 80 rounds at the officers.

With the woman continually screaming in the background, Iurato limps around to the front of the house — before multiple shots go off and he ducks behind a police cruiser.

At one point, a man can be heard groaning, but it is unclear if it is one of the downed officers or Brutcher’s brother, Nathaniel, who was wounded in the shooting.

Iurato then fires a single shot, striking and killing Brutcher outside the house.

“One down. Suspect down,” he radios in.

Investigators said the three cops were lured to the house by a bogus 911 call, and were at a side door speaking to Brutcher’s brother, Nathaniel, when the killer came up from behind and opened fire with an AR-15-style assault rifle.

Police have not revealed a motive for the senseless slaughter. 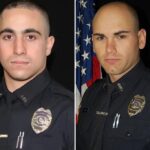 Slain Bristol police officers will be laid to rest at joint funeral at Conn. stadium