Climate activist Greta Thunberg has been arrested by police at an environmental protest in Germany, authorities said Tuesday.

Thunberg, 20 was seen being carried away via her arms and legs by officers while participating in demonstrations this week in Lützerath, a small village owned by utility firm RWE, SkyNews reported.

The hamlet became a hotbed for Germany’s climate debate after it was cleared to make way for the expansion of the Garzweiler coal mine.

According to a spokesperson for the Aachen police force, Thunberg was part of a group of protestors that “stormed” to the “steep and extremely dangerous” edge of an open-case mine.

Officers confirmed that the activist was subsequently carried away and is being held with other protestors for identification. No one has been arrested.

The Tuesday detainment marks Thunberg’s second run-in with authorities since she joined the protests on Saturday. Images from the demonstrations show the Swedish native being held by police clad in tactical gear.

In another image, Thunberg flashes a thumbs-up from inside a bus.

Thunberg’s detainment comes as Germany’s long-running debate about coal use has entered a fever pitch thanks to the ongoing Russian invasion of Ukraine.

Largely cut off from the Russian gas it typically relies on, the government is looking to use lignite coal from the Garzweiler mine for short-term energy security.

Climate activists, however, argue that lignite is the most health-harming form of coal, and demand the government stick to its previous goal of phasing out coal energy.

Protestors moved into abandoned homes in Lützerath two years ago, arguing that flattening the village would release massive amounts of greenhouse gases from mined fossil fuels.

The group LuetziBleibt, or “Luetzi is Staying,” said earlier this month that about 200 people are still there.

Police have been attempting to clear out the protestors for a few weeks. As of mid-January, many remains despite buildings being bulldozed and makeshift treehouses chopped down.

Thunberg’s detainment also came shortly after the authorities were intimidated by a so-called “mud wizard,” or a protestor dressed in warlock robes that flailed around as if casting spells through the wet conditions. 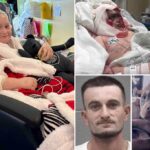 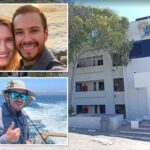 Elliot Blair, lawyer who died in Mexico, had injury inconsistent with fall: report