A gun-toting father and son duo shot at an innocent woman they mistakenly believed wanted to break into their Florida home in what authorities characterized as a “really, really stupid” incident.

“This ranks among the craziest stuff that I have seen in a while and I’ve seen a lot of crazy stuff,” Polk County Sheriff Grady Judd said of the Saturday morning incident.

Gino Colonacosta, 73, and son Rocky, just 15, thought an intruder was lurking when it was just a good neighbor who dropped off a package of medicine at their door that was sent to the wrong home in their apartment complex, Judd said in a Monday press conference.

The Colonacostas saw the man on their Ring doorbell and found it suspicious, the top cop said.

The teenage son, armed with a gun, went outside to look around, but the man already went home. Then the pair walk outside in search of the non-existent burglar before spotting a car with tinted windows and the engine running about 100 yards from their home.

Inside the car, a woman was fiddling on her phone and minding her own business as Gino Colonacosta pointed a gun at her and demanded she get out of the car.

The woman thought she was being carjacked and frantically reversed her car, crashing into another vehicle in back of her, Judd said.

Rocky Colonacosta started firing at her because he believed the driver was attempting to back into him and then his old man also started shooting as she drove away, Judd said.

None of the seven shots fired hit the victim, though one struck a baby’s car seat in the back and lodged into the driver’s seat of the car, Judd said.

“Our victim was that close to death,” he said.

He called the Colonacostas “way out of line.” Both are facing attempted murder charges, among other criminal counts, he added.

Judd said he wants to see both languish behind the bars, noting the teenage son isn’t even allowed to possess a gun.

“They searched people out to shoot them,” Judd said. “And newsflash, even if the first guy who would’ve been the burglary suspect — if he was — they shot the wrong person.

“So anybody that walks up to their front door, a friend, a relative, a neighbor doing a neighborly deed by delivering medicine that got sent to the wrong house gets shot at,” Judd exclaimed. “What are they thinking?” 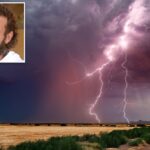 Arizona dad saves daughter after she was struck by lightning 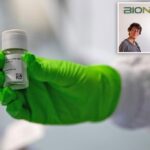 COVID vax-makers say cancer vaccine could be available by 2030