WASHINGTON — Sen. Kirsten Gillibrand is the latest politician to say she will offload campaign contributions from disgraced former cryptocurrency “billionaire” Sam Bankman-Fried — who poured millions into electing President Biden before his business FTX went bust last week with up to $2 billion in client funds missing.

The New York Democrat moved to distance herself from Bankman-Fried following similar steps by at least four other congressional Democrats and one Republican — as FTX’s collapse echoes the downfall of Bernie Madoff’s infamous Ponzi scheme, with victims ranging from a teachers’ pension fund to elite venture capitalists and institutional bankers.

On June 20, Bankman-Fried donated the maximum amount allowed to Gillbrand — totaling $5,800, in two tranches, according to Federal Election Commission records — and on the same day gave another $10,800 to the Gillibrand Victory Fund PAC.

Bankman-Fried, 30, and his younger brother Gabriel donated lavishly to members of both political parties, though Democrats were disproportionately targeted.

In the 2020 election, Bankman-Fried spent $10 million backing Biden’s campaign. When asked for comment on whether Biden wants those funds to be returned, the White House referred The Post to the Democratic National Committee, which did not reply.

Bankman-Fried was the second-largest donor for congressional Democrats in last week’s midterm election, donating at least $39.2 million — second only to the pro-Democratic billionaire George Soros.

The former FTX boss, who now is under multiple federal investigations, greased palms in Washington as he sought to shape the regulation of cryptocurrency, which skeptics view as risky due to volatility in value and the schemes of sophisticated digital hucksters and thieves.

It’s unclear if Gillibrand ever met with Bankman-Fried or his representatives.

The supposed billionaire made multiple visits to DC this year and even was welcomed to at least two West Wing meetings by one of Biden’s most senior aides, Steve Ricchetti, according to visitor logs. It’s unclear who else he may have met during those April 22 and May 11 visits — as guests often are introduced to others once actually inside the White House.

Ruppersberger will donate a $500 contribution made last year by Gabriel Bankman-Fried to the University of Maryland Medical System Foundation, his spokesman told The Post.

Carbajal will be donating the $5,800 he received from Sam Bankman-Fried this year — $2,900 for his primary election campaign and $2,900 for the general election — “to a local charity,” spokesman Ian Mariani told The Post.

Hern (R-Okla.) gave $5,000 he received from FTX executive Ryan Salame to a charity called Food on the Move, the Block reported.

The scope of Bankman-Fried’s financing of US politics and related influence was staggering. His mother, Stanford Law professor Barbara Fried, additionally raised $140 million through her pro-Democratic Mind The Gap PAC and Gabriel Bankman-Fried managed the nonprofit Guarding Against Pandemics .

Most members of Congress haven’t responded to inquires from The Post.

The following members of Congress and winning candidates were contacted by The Post regarding their plans for funds from Sam and Gabriel Bankman-Fried: 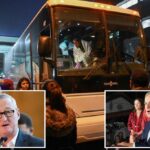