A man and woman in Georgia confused a Walmart cashier in order to steal more than $6,000 in merchandise and gift cards, according to authorities.

The pair loaded a Walmart cart with a bunch of expensive items in Grovetown on Nov. 30, according to the Columbia County Sheriff’s Office. When they got to the cash register, they made several card transactions, according to deputies, WRDW reported.

The two people managed to confuse the cashier when they asked that the “cash” button on the register be hit in order for their credit card to work.

The tactic then led to the merchandise getting rung up as if it would be paid for by cash, so their credit cards were not charged, WRDW reported.

They left the store with $3,400 in merchandise and $3,000 in gift cards. The sheriff’s office is calling the incident a “theft by deception.”

The Columbia County Sheriff’s Department said in a Facebook update on the crime that a suspect has been identified.

A spokesperson for the sheriff’s office told Fox News Digital on Thursday that investigators identified 19-year-old Jaylan Griggs from Flint, Michigan, as the male suspect. They have not yet identified the female suspect. 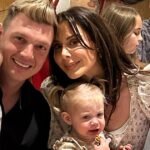