Santos stood next to Reps. Matt Gaetz and Lauren Boebert with his right hand raised and pledged to uphold the Constitution along with other members of the 118th Congress as they were sworn in by newly-elected House Speaker Kevin McCarthy.

Republican gridlock over the selection of a House speaker delayed the Queens and Long Island representative’s swearing-in for several days.

It’s unclear when Santos will pose for his ceremonial photo individually with Speaker McCarthy, as is customary following the official swearing-in.

Now that Santos is officially New York’s 3rd Congressional District representative, House members hold the power to kick him out of his seat.

The House can remove Santos by a two-thirds vote.

Federal prosecutors in the US Attorney’s Office for the Eastern District of New York are reportedly probing the finances of the fibbing congressman, who’s facing questions over the origins of his mysterious wealth.

The prosecutors are reportedly looking into the 34-year-old Long Island pol’s financial disclosure filings where Santos reported earning $750,000 from his Devolder Organization consulting firm, along with dividends valued between $1 million and $5 million.

In 2020, Santos reported making just $55,000 in annual salary and the filings also show that he loaned his own successful House campaign for New York’s 3rd Congressional District more than $700,000.

Santos is also under a state investigation in New York, and Nassau County District Attorney Anne Donnelly announced last month that her office would be investigating Santos as well after he admitted to The Post about lying about virtually his entire resume.

Santos told The Post last month that he never went to Baruch College, never worked at Goldman Sachs or Citigroup, isn’t Jewish, and doesn’t own any property – all claims he made on the campaign trail.

In his first few days in the Capitol Building, Santos has been given the cold shoulder by most lawmakers. He has mostly been seen sitting alone and rarely has interacted with any of his new colleagues.

For the most part, Santos has avoided sitting the chamber for longer than he is needed, only popping in to cast his vote for McCarthy as House speaker.

He has avoided nearly all questions from reporters who have followed him around the Capitol complex.

On Thursday it appeared that he may have struck up a friendship with firebrand Rep. Marjorie Taylor Greene (R-Ga.). The two were spotted whispering to each other on the House floor and laughing at one another’s comments.

One member of New York’s congressional delegation, however, has already called for him to resign.

“Brazilian authorities are reopening the criminal case against George Santos, who committed fraud in Brazil. Santos is now the target of local, state, national, and international law enforcement. Santos should resign before disgracing himself any further,” Rep. Ritchie Torres (D-N.Y.) said on Monday.

Rather than considering his resignation, Santos has gone on a hiring spree during his short time on Capitol Hill, bringing on Viswanag “Vish” Burra, a political operative with ties to former White House strategist Steve Bannon and businessman Carl Paladino. 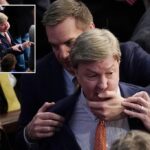 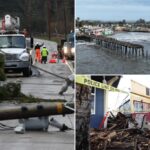