Congressman-elect George Santos’ web of lies has gotten even more tangled after he stated last year that the Sept. 11, 2001, terror attacks claimed his mother’s life — only to tweet months later that she actually died of cancer in 2016.

The Republican, who is poised to represent New York’s 3rd Congressional District beginning next week, has admitted to fabricating much of his resume and concocting lies about various aspects of his personal life and family background.

Journalist Yashar Ali first shared Santos’ contradictory tweets about his mom, which he fired off five months apart in 2021.

In July of that year, Santos was responding to an account called “9/11 is a victimless crime” when he wrote: “9/11 claimed my mothers (sic) life…so I’m blocking so I don’t ever have to read this again.”

In December of the same year, Santos tweeted: “December 23rd this year marks 5 years I lost my best friend and mentor. Mom you will live forever in my heart.”

Santos’ campaign website states that his mother “was in her office in the South Tower on September 11, 2001, when the horrific events of that day unfolded. She survived the tragic events of September 11th, but she passed away a few years later when she lost her battle to cancer.”

According to her online obituary, Santos’ mother, Fatima A.C.H. Devolder, died on Dec. 23, 2016 — more than 15 years and 3 months after the attacks. She passed away at a Long Island hospice facility a day after celebrating her 64th birthday.

As of August last year, shortly before the 20th anniversary of 9/11, health officials said they had recorded 23,710 cases of cancer among first responders and people who lived, worked or went to school near the World Trade Center. That total included 1,510 deaths.

While it is conceivable that Fatima Devolder contracted cancer from toxins released by the collapse of the Twin Towers, there is no evidence she was at or around Ground Zero during or immediately after the attack.

A previous version of Santos’ website reportedly claimed that his mother worked as a financial executive, but public employment records obtained by NBC News indicated that her sole listed employer was an imports company in Queens that went out of business in 1994.

Santos did not immediately respond Thursday to phone and email messages asking him to clarify claims about his mother’s death.

In an interview with The Post Monday, Santos, 34 admitted that he lied about his college education, his employment history and his religious background.

Santos came clean after the Times revealed that there was no record of his employment at top Wall Street firms Goldman Sachs and Citigroup. The publication also found no evidence that the congressman-elect ever graduated from Baruch College, as he indicated in his biography.

“My sins here are embellishing my resume. I’m sorry,” Santos said, adding, “We do stupid things in life.”

In campaign materials, Santos described himself as a “proud American Jew.” Speaking to The Post, he clarified that he was actually Catholic, but “because I learned my maternal family had a Jewish background I said I was ‘Jew-ish,’” he said.

The admitted fabulist also claimed his family were refugees who escaped Nazi persecution in Ukraine and settled in Belgium before immigrating to the US.

He told Fox News Digital in February that his ancestral name is Zabrovsky, but that he now uses his mother’s maiden name of Devolder, which is Dutch in origin.

A genealogist hired by CNN found “no sign of Jewish and/or Ukrainian heritage and no indication of name changes along the way.”

Santos also said in a December 2020 radio interview that his mother immigrated to the US from Belgium, but genealogical records reviewed by CNN and The Forward indicated that she was a native of Brazil, as were Santos’ maternal grandparents.

On Wednesday, Nassau County District Attorney Anne Donnelly, a Republican, announced that her office has launched an investigation into Santos.

“The numerous fabrications and inconsistencies associated with Congressman-elect Santos are nothing short of stunning,” Donnelly said in a statement. “The residents of Nassau County and other parts of the 3rd District must have an honest and accountable representative in Congress.”

Despite facing growing scrutiny and outrage from Democrats and Republicans alike, Santos has shown no signs that he will be willing to step aside before his Jan. 3 swearing-in ceremony.

Under Article I of the Constitution, House members must be at least 25 years old, been a citizen of the US for at least seven years and live in the state they represent. A duly elected member cannot be excluded from being seated unless they flout one of those criteria. 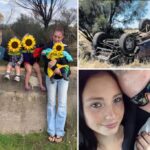 Australian kids survive 55 hours next to dead parents in SUV 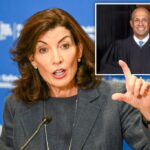