The surge in illegal immigration at the southern border in the first months of Joe Biden’s presidency enraged the commander-in-chief, who was frustrated over what he saw as a “lack of solutions,” a forthcoming book claims.

Author Chris Whipple claims in “The Fight of His Life,” out Jan. 17, that Biden became “furious” as the number of migrant encounters at the US-Mexico frontier spiked almost immediately after he took office in January 2021.

“Aides had rarely seen him so angry,” Whipple writes, according to Fox News. “From all over the West Wing, you could hear the president cursing, dropping f-bombs (he’d always apologize when women were present).”

“It’s like, ‘How would you feel if you were me and these were the solutions you had?’ It’s the weight of the presidency, right?’” one of the now 80-year-old president’s advisers told Whipple.

Whipple goes on to write that “next to vaccine disinformation,” the border crisis “was the thing that made Biden’s blood boil.”

“Early in his term he had reserved the f-bomb mostly for discussions of the southern border, but lately he was using it more often,” Whipple goes on.

Biden’s flashes of temper are hardly a secret. In May of last year, the New York Times reported that the president had lashed out at Health and Human Services Secretary Xavier Becerra that March after he was unable to answer questions about HHS’ ability to take care of migrant children picked up at the border.

US Customs and Border Protection reported more than 1.6 million encounters with migrants along the southern border during the 2021 fiscal year, more than four times the number recorded in fiscal year 2020 under former President Donald Trump.

In fiscal year 2022, the border crisis got even worse, with the number of encounters rising to more than 2.3 million, breaking the previous 12-month period’s record.

Whipple’s book made waves earlier this week when an excerpt from it revealed that Biden once described Vice President Kamala Harris as a “work in progress” and vented to a friend about her after he learned that her husband, Douglas Emhoff, was complaining about the tasks assigned to the veep, including deterring illegal immigration at the US-Mexico border.

The Biden administration has faced criticism from Republicans for rolling back Trump-era border security policies, such as the “Remain in Mexico” policy and wall construction at the southern border.

The White House has also been accused of failing to prepare for the expected surge in migrants as a result of the end of the potential end of the Title 42 public health order, which has been used to immediately expel hundreds of thousands of migrants stopped at the border. 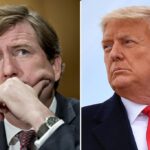 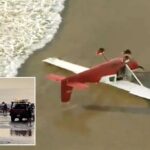