Pope Benedict XVI died at the age of 95 on Saturday, December 31, in his residence at the Vatican.

“With sorrow, I inform you that the Pope Emeritus, Benedict XVI, passed away today at 9:34 in the Mater Ecclesiae Monastery in the Vatican,” Matteo Bruni, director of the Holy See Press Office, confirmed in a statement via Twitter. “Further information will be provided as soon as possible.”

Bruni added that the late pope’s funeral will be led by Pope Francis on Thursday, January 5, in St. Peter’s Square in the Vatican City, according to CNN.

Three days beforehand, Pope Francis, 86, revealed that the late bishop was ill and asked the audience to join in a “special prayer” on Wednesday, December 28.

“I would like to ask all of you for a special prayer for Pope Emeritus Benedict, who, in silence, is sustaining the church,” Francis said in his speech, per NBC. “He is very sick, asking the Lord to console and sustain him in this witness of love for the church, until the end.”

That day, Bruni confirmed that Benedict’s health had abruptly “worsened.”

“I can confirm that in the last few hours, his condition worsened due to age,” he wrote, adding, “The situation at present is under control, monitored constantly by doctors.”

Benedict was head of the Catholic Church for nearly eight years. He began his term shortly after late Pope John Paul II died in April 2005.

In 2013, Benedict became the first pope to resign in more than 600 years, making headlines that year for his unprecedented decision. In his formal resignation, he cited his “advanced age” as the main reason for his choice.

In February of that year, the former pontiff held his final mass in front of a crowd of more than 55,000 supporters in St. Peter’s Square.

“To love the church also means having the courage to take difficult decisions,” he said at the time. 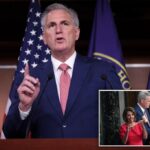 Kevin McCarthy allies say they won’t vote for anyone else 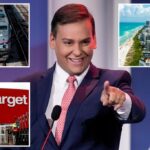