A stunning time-lapse video shows Hurricane Ian overwhelming a Fort Myers waterfront street and washing away a home in a 15-foot storm surge.

The footage, captured by storm chaser Max Olson, shows waters rising in the area and slowly swallowing it whole Wednesday.

The red structure gradually succumbs to the storm, eventually coming off its foundation and floating away in the debris-filled deluge.

The clip ends with a shot of the storm’s aftermath after the water finally receded, with the block all but unrecognizable.

A staircase attached to the side of the obliterated house was the only portion of the structure that remained.

Waterfront sections of the coastal town were overwhelmed with raging floodwaters and whipping winds after the historic storm touched down at Category 4.

An evacuation order was issued before the storm made landfall, but some homeowners opted to wait out the hurricane.

“It’s horrific,” Fort Myers Mayor Kevin Anderson told CNN Friday morning from the once-scenic town’s obliterated marina. “Look at some of these docks. They could weigh as much as a ton … and they’ve been thrown around like they were nothing.” 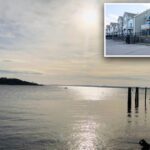 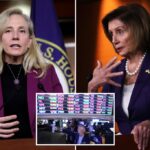