FORT MYERS, Fla. — A Florida man climbed onto a piece of a demolished dock and rode it to safety “like Huckleberry Finn” as deadly floodwaters from Hurricane Ian drowned his apartment early Thursday morning.

Christopher Prevost, 38, recounted the harrowing tale to The Post in the parking lot of his damaged apartment complex, where two luxury yachts — both more than 40 feet long and worth an estimated $250,000 each — are now wedged between buildings.

The resident of the Riverwalk Apartments in downtown Fort Myers said he didn’t even notice the two-story yachts were outside his window until he was forced to swim out of his apartment at midnight because floodwater was pouring into his home through the front door hinges and lock.

Once out of the house, the surgical technologist grabbed onto the piece of the dock and paddled.

“This thing, part of a dock, was floating. I rode this thing like Huckleberry Finn…I was scared but I was excited,” Prevost said, comparing himself to the fictional Mark Twain character famous for floating down the Mississippi River on a makeshift raft.

“Then I jumped on this boat to see where I could go and someone was like ‘get off my boat!’ so the guy must have been [on it],” he said.

Prevost hopped back on to his raft and paddled as far as he could towards First Avenue before giving up and swimming to the street.

The neighborhood descended into chaos during the storm, he said.

“The palm tree on the street was on fire. Giant palms had fallen. It was pretty crazy,” he said.

Prevost lost almost all his possessions, and a friend ended up picking him up in the middle of the night and bringing him to safety

The owners of the boats sitting in the apartment complex’s parking lot were nowhere to be found on Thursday.

Other residents at Riverwalk Apartments were reeling from the devastation wrought by Hurricane Ian and putrid smell of their mud-filled homes.

Mom of three Kimberly Santoro was among the majority of Fort Myers residents who didn’t evacuate because they underestimated the speed and scale of floodwaters during the hurricane.

“OK, so I understand they told us to evacuate, but no one thought it would be this bad,” the 36-year-old said.

“We’ve had hurricanes before but we didn’t have flooding like this,” she added, noting that floodwaters did not more damage than the wind. “We only lost power for an hour, the buildings were mostly fine and the windows didn’t even break, so we thought we would be fine.

“Within 10 minutes it rose from an inch or two of water to five feet of water. When it got to the windowsills me and my neighbors jumped out of our windows and sheltered in an empty apartment upstairs that was unlocked.”

Santoro returned home on Thursday morning to find her pet rabbit had drowned. Now, she doesn’t know where she and her family will go.

“I have lost everything. Everything. I don’t have anything. All my furniture and my bed is ruined. My kitchen table’s upside down. The fridge was lifted. I won’t even go in my bathroom, it’s a mess.” 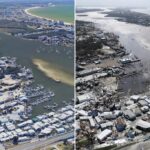 Hurricane Ian before and after photos