Dressed in a hip-hugging golden gown, her brunette tresses flowing to one side, Casey DeSantis could have been mistaken for a Hollywood celebrity or a beauty queen when she appeared onstage in Tampa Tuesday behind her victorious husband after he trounced his opponent and won a second term as Florida governor.

But Florida’s first lady, a former journalist and cancer survivor who is raising three small children, is very much a Wonder Woman figure in the state and the not-so-secret weapon who calls the shots on image strategy as Ron DeSantis’ political fortunes continue to rise.

The Republican star, who coasted to re-election after beating Democratic rival Charlie Crist by 19 percentage points Tuesday, is now a potential 2024 presidential candidate.

“She was front and center last night, radiant as usual,” said Peter Schorsch, publisher of Florida Politics, an online journal that reports on political campaigns, elections and lobbying in the Sunshine State.

For Schorsch, a former Republican operative, the first lady’s regal demeanor and golden gown, which contrasted with other political wives on midterm night, who were mainly dressed in primary-colored business attire, was a well-orchestrated message that the DeSantis family is now “front and center” and on the cusp of reigning over US politics. The couple’s children — Madison, 5, Mason, 4 and Mamie, 2 — often appear with them in campaign ads and at public events.

“We should be celebrating that radiance of an individual who has a history of appearing in front of a crowd with her family and understands how to engage the media in an age of models and the Kardashians,” Schorsch told The Post. “I hate to say this, but the whole family reminds me of the Kennedys, totally poised and comfortable in front of the camera.”

Casey DeSantis, 42, is a former broadcast journalist who is well known in Florida political circles as a key producer of her husband’s campaign ads and one of DeSantis’ closest confidantes — “my best friend and best supporter,” DeSantis, 44, told Fox News.

“The circle of trust is very small,” added political consultant Ryan Girdusky. “They don’t have a ton of consultants and Casey is very important.”

Her importance will skyrocket if DeSantis goes forward with a 2024 run for president.

Casey has been active since DeSantis was campaigning for Congress in 2012. In his first Republican primary race for governor in 2018, she featured two of the couple’s small children in a lighthearted television ad in which DeSantis helped one of them “build the wall” with colorful blocks. During his first term as governor, Casey had her own office in the State Capitol in Tallahassee.

In a recent campaign ad that aired during DeSantis’ gubernatorial re-election campaign, Casey sits cross-legged on a couch and speaks bluntly about her battle with breast cancer in 2021 and 2022 as photographs showing DeSantis throughout his life — holding a fishing pole, on the football field, in a navy uniform, on the campaign trail — flash on the screen.

“If you want to know who Ron DeSantis really is, when I was diagnosed with cancer and I was facing the battle for my life, he was the dad who took care of my children when I couldn’t,” she said, wearing jeans and pullover, her long straight hair pulled back from her face. “He was there to pick me off of the ground when I literally could not stand. He was there to fight for me when I didn’t have the strength to fight for myself.”

For Schorsch, the largely unscripted ad “was a love letter to Ron as it was anything else.”

“If we’ve given Donald Trump high marks because of the years he appeared on ‘The Apprentice’ then we have to commend Casey DeSantis for bringing that television experience to the political candidate of the 21st century,” he said.

When Casey left the hospital in March, her husband issued a statement on his website announcing that she was cancer free. “For all the women out there who are going through breast cancer right now — you can overcome this. I know it’s very difficult, but my wife is proof positive, and this is the exact type of news we had hoped for,” he said. “She still has more to do, but I’m confident she’s going to make a full recovery.”

Born in Ohio in 1980, Jill Casey Black, a golf enthusiast and champion equestrian, graduated with an economics degree from the College of Charleston in South Carolina before starting her career in journalism. She worked as a news announcer and anchor at WJXT, an independent station in Jacksonville, when she met DeSantis, a naval officer, on a golf course at the University of North Florida. In 2010, she worked as an anchor and reporter on the PGA Tour, according to her LinkedIn profile.

“We met at the University of North Florida at the driving range off Kernan,” Casey DeSantis told First Coast News in 2018. “I kept looking over my shoulder because I wanted the bucket of balls that somebody had left because my swing was so terrible. I needed as much practice as I could possibly get. As I’m looking over behind me, Ron is over there. He thinks I’m looking at him. I was really looking at the balls. Long story short we started to talk and that’s how we met.”

DeSantis, who graduated from Yale University and Harvard Law School, joined the US Navy in 2004 and worked as a legal advisor for Seal Team One before he was deployed to Iraq in 2007. He returned to the US a year later, and was appointed a Special Assistant US Attorney by the Department of Justice.

The couple was engaged six months after their first meeting on the golf course, and married on Sept. 26, 2009, at the Walt Disney World Resort. They held their reception with 150 guests at Epcot’s Italy Isola, according to a report in Business Insider, which obtained a copy of the marriage license. Earlier this year, DeSantis signed a controversial bill dissolving Disney’s self-governing status after the resort publicly opposed his Parental Rights in Education bill, which restricts the discussion of sexual orientation in public schools.

Three years after their marriage, DeSantis ran in the Republican primary for Florida’s 6th Congressional District. He won over five other candidates with 39 percent of the vote. In November 2012 he won the Congressional seat, and was re-elected in 2014 and 2016.

Although she has long been supportive behind the scenes, Casey took on a much more hands-on role in the state during Hurricane Ian, which left 114 people dead and cut off electricity to millions after it hit Florida at the end of September. DeSantis put his wife in charge of the state’s disaster relief fund, and she went to work raising money and assembling a group of emergency volunteers. Under her leadership, the Florida Disaster Fund raised more than $45 million, a record for the fund. At press conferences reporting on the trajectory of the storm, she was pictured in a red fleece and jeans standing behind her husband and visiting the Coast Guard.

At one event at the height of the hurricane, Casey DeSantis, who had emerged from cancer treatment just five months earlier, signaled she was ready for anything. 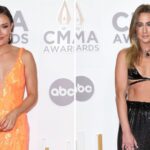 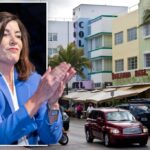