A sick couple was recorded torturing a kitten on a Florida beach before a good Samaritan stepped in to save the helpless and badly battered animal.

The man and woman were seen tossing the kitten around like a toy in the ocean in Sunny Isles Beach late last month as numerous beachgoers watched in shock until animal activist Natalia Martin had seen enough and decided to step in.

“The guy started being so aggressive towards me,” Martin told WPLG. “He starts stepping up, he says, ‘Hey, look, this is my cat. This is not your business. I can do what I want.’ And then he was like, ‘If you don’t want me to throw the cat, give me $1,000 right now’.”

Disturbing video taken by Martin shows the couple throwing the tiny gray cat back and forth in the ocean as it struggled to hold its head above the waves.

“They were throwing her like this into the water,” she said. “They were trying to make her swim and the cat was so scared, she was passing out already. She was half alive.”

“They were just trying to pick her up and throw her again,” Martin said. “There was a beach full of people. They were trying to look and see what was going on. Everyone was shocked.”

Police arrived and asked the couple to leave the beach for violating its rule prohibiting animals on the beach.

But the couple, identified by police as 27-year-old John Laguerre and 22-year-old Jamarria Wayne, were uncooperative.

Video obtained by WPLG shows Luguerre yelling profanities at officers as they wrestle with him. Wayne is also accused of screaming at police and threatening to bite one of the officers.

As police hauled the couple away, they handed the traumatized kitten to Martin.

“The kitten was saved. She was all shaking — she was barely alive,” Martin said.

She said she wrapped the kitty up in a towel and filled out a police report.

After the couple never came back to retrieve the kitten from local animal services, Martin adopted the kitten for two days and found her a new home. 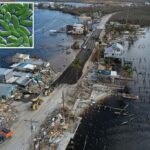 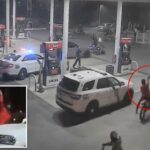