A group of flamingos got a leg up on Hurricane Ian — by hunkering down in a ladies room at a botanical garden in St. Petersburg.

“Our animals are safe w/staff on site to see them through the storm,” Sunken Gardens said in a tweet Wednesday. “The flamingos are having a hurricane party in the bathroom; eating, drinking, & dancing.”

The image of the Chilean flamingos huddling together in front of restroom stalls at the roadside attraction as the storm slammed into the Sunshine State quickly went viral.

“It was just mainly for our members and folks that follow us,” supervising director Dwayne Biggs told the Tampa Bay Tribune. “It’s gone all over the country.”

Animals at Sunken Gardens often weather storms in another hurricane-proof building at the site, but the staff decided to take extra precautions with Ian and ushered them to the main building, the newspaper reported.

The pink birds congregated inside the women’s powder room next to the main lobby.

“Actually it’s pretty close to what you would design for an animal-holding overnight facility,” Biggs told the Tampa Bay Tribune on Thursday. “And it was the perfect size for our 21 flamingos.”

He added, chuckling: “We’re going to sterilize and clean it afterwards. We’ll be moving them out first thing tomorrow morning.”

Other animals at Sunken Gardens were similarly moved inside as the storm barreled in, the paper reported.

Macaws, Amazon parrots, cockatoos and a kookaburra from Australia were all moved to a classroom, but the flamingos required special attention.

“There’s a special technique to carry them safely,” Biggs told the outlet. “Their legs are very delicate, so there’s a certain way to grab the legs and tuck them underneath and kind of cuddle them…That took some time.”

As they snuggled together, the birds snacked on flamingo-formulated pellets and Biggs checked up on them throughout the storm.

“I‘m glad we posted that,” Biggs told the paper about the image of the birds. “It’s kind of provided a little bit of breath of air here after this storm.”

One of the people who reacted to the post wrote: “Awww. So happy to see animals and wildlife taken to shelter before storm. I’m a hurricane Sandy of the Jersey Shore ‘kind of survivor’ as only our lives were saved and those of our pets. Everything else and I mean everything, gone.”

The photo was reminiscent of other images of flamingos sheltering in bathrooms, including one of them inside a men’s restroom at the Miami Metrozoo (now Zoo Miami) in 1998 during Hurricane Georges and a similar group at the zoo the following year during Hurricane Floyd.

St. Petersburg was hit with hurricane-force winds and heavy rains during the storm, but appeared to have been largely spared the worst effects of the storm. 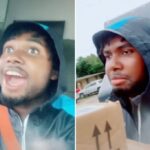 Amazon driver goes on tirade about deliveries during Ian 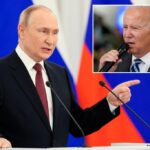 US sanctions Russia as Putin annexes parts of Ukraine