An Austrian woman who dubbed herself “Fetisch Barbie,” has spent over $48,000 on lip fillers and other body modifications and has no plans to stop.

“My huge lips are probably my most polarizing modification, people either love it or hate it and I’m obsessed with it,” she told The Mirror.

A budding social media star, who has amassed more than 22,000 followers on Instagram and also has an OnlyFans page, she said the “plastic look” is her “fetish.”

From the age of 18, she’s had countless cosmetic procedures including 50 to 60 injections in her lips and breast augmentation to transform her chest size from a 30 AA to a 30 G.

Fetisch Barbie, who is in her late twenties and hails from Vienna, described herself as “professional disciplinarian of the male sex” and a “sex therapist” on her Twitter page.

She has a large male clientele who shower her with gifts. On her Linktree account, she even has a link to an Amazon wish list.

“I will never stop getting surgeries,” said Fetisch in an interview with Truly. “I can’t live without it. I’m not addicted, but I’m obsessed with it.” 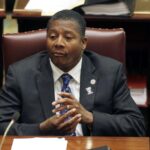 James Sanders’ foreclosure-relief bill could help his own home