WASHINGTON — President Biden said Tuesday that Russia would be making a “serious mistake” by launching a “false flag” nuclear attack in Ukraine and that it’s unclear if such an operation was underway.

The Kremlin claimed Monday that Ukraine was planning to use a radioactive “dirty bomb” against Russian forces.

“On the dirty bomb allegations from Russia as it relates to Ukraine: Do you believe that this is the beginning of a false flag operation?” a reporter asked Biden as he got his fifth COVID-19 vaccine shot.

“Is Russia preparing to deploy a dirty bomb itself or a nuclear weapon?” the journalist asked.

Biden responded, “I spent a lot of time today talking about that.”

“Let me just say: Russia would be making an incredible, serious mistake if it were to use a tactical nuclear weapon,” Biden said. “I’m not guaranteeing that it’s a false flag operation yet. Don’t know, but it would be a serious mistake, a very serious mistake.”

The US, UK and French governments responded to the Russian claim with a joint statement saying that “the world would see through any attempt to use this allegation as a pretext for escalation.”

At a Pentagon briefing Tuesday, Air Force Brig. Gen. Patrick Ryder said, “From a US standpoint, the allegations that Ukraine is building a dirty bomb are false.”

“We have not seen at this time, though, any indication that Russia has made a decision or intends to employ nuclear weapons or a dirty bomb [either],” Ryder added.

Russian troops invaded Ukraine on Feb. 24 after Biden warned for weeks about a potential false-flag justification for conflict. Putin previously annexed Crimea in 2014 and backed pro-Russia rebels in eastern Ukraine. 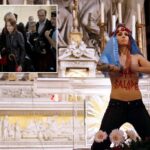