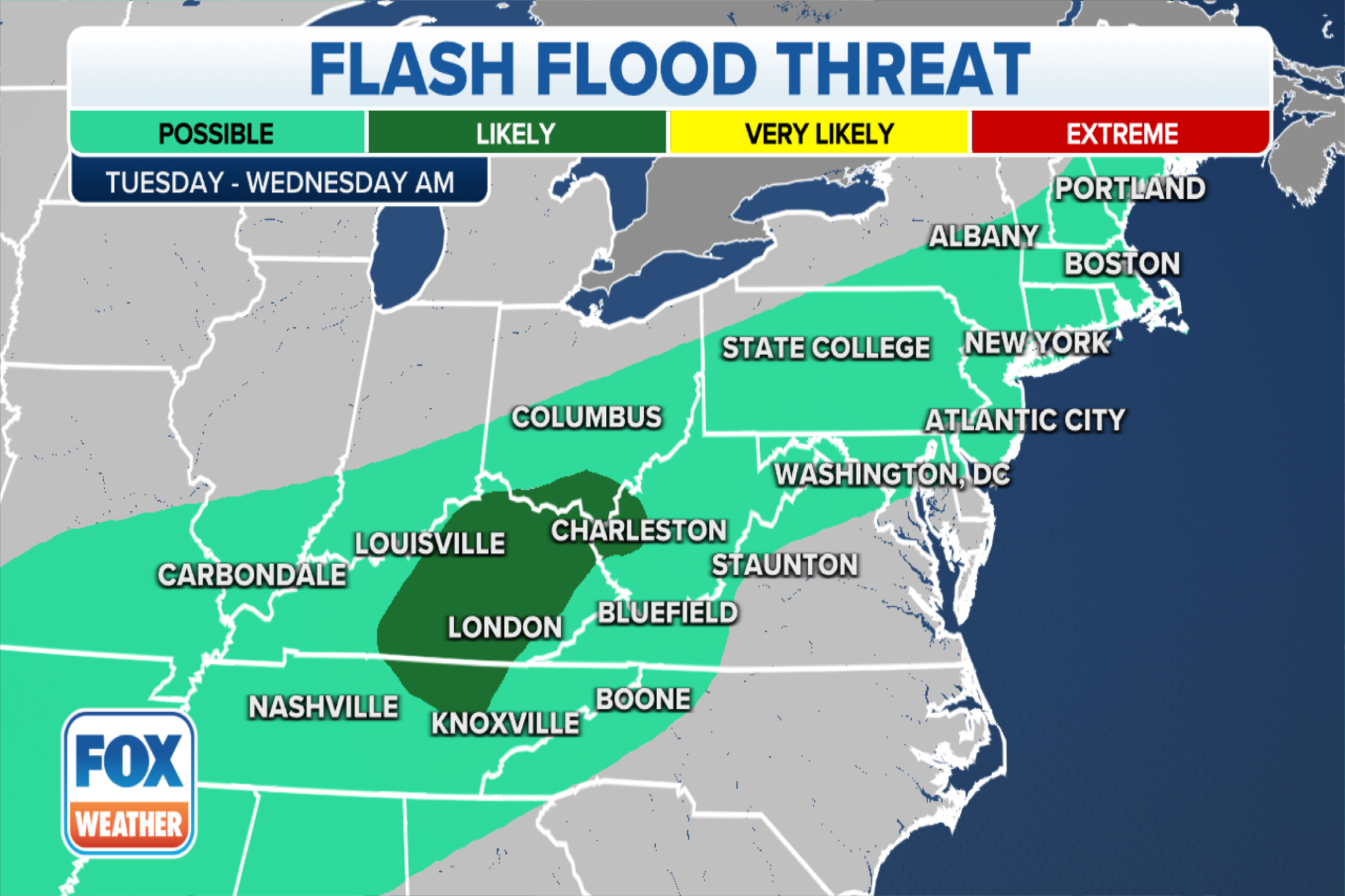 A slow-moving front extending from the Northeast southwestward to the Ohio and Mississippi valleys this week will trigger an expansive flash flood threat, including for waterlogged Kentucky, which continues to recover after historic and catastrophic flooding killed at least 37 people less than two weeks ago.

Abundant amounts of moisture building up along the front will fuel the development of numerous showers and thunderstorms through midweek, enhancing the flash flood threat, especially in areas where the ground is already saturated from heavy rain and flooding in recent weeks.

“With that slow movement, we just dump all this moisture into one spot,” said FOX Weather meteorologist Britta Merwin. “Now it doesn’t mean it’s going to rain consistently across the entire area, but when you start to have rain come down, you are going to see a threat of it coming down a lot in a short amount of time.”

On Monday morning, showers and storms were dumping torrential rainfall across northwestern Illinois, prompting the National Weather Service to issue Flash Flood Warnings as some roads were expected to become impassible.

Eastern portions of the Ohio and Tennessee valleys will be the most sensitive to flash flooding over the next few days. This includes flood-ravaged eastern Kentucky.

While a broad area from northern New England southwestward to the mid-Mississippi Valley faces the threat of flash flooding on Monday, the highest flood threat is expected on Tuesday and Wednesday.

Areas most at risk of flash flooding on Tuesday include eastern Kentucky and adjacent portions of northern Tennessee, southern Ohio and southwestern West Virginia.

An additional widespread 1 to 3 inches of rain is expected in most areas along the slow-moving front this week. Isolated pockets of 3 to 5 inches can’t be ruled out, especially in eastern portions of the Ohio and Tennessee valleys.

“In the afternoon, we can have thunderstorms that easily produce 2 to 3 inches of rain per hour, and that’s what causes that flash flooding concern, and the potential is there for everyone, so it really just means that you have to be vigilant,” Merwin said.

The rainfall will certainly be welcome news for the Northeast, where drought conditions have developed in recent weeks due to a lack of rain, but it will only add to flooding concerns in the already-saturated areas of Kentucky and the Midwest.