New York Gov. Kathy Hochul needs to abandon her “Rose Garden strategies” and “get out there and make [her] case to the public” if she wants to avoid an upset from Republican challenger Rep. Lee Zeldin, former Gov. David Paterson said in an interview Sunday.

Paterson, who like Hochul was elevated to high office in Albany after his predecessor resigned amid a sex scandal, said it has been a mistake for his fellow Democrat to attack Zeldin while he taps into the public’s unease over crime.

“A number of people are just, uh, anxious, and after everything we went through in the pandemic, now we get to go out,” Paterson told John Catsimatidis on WABC 770 AM’s “Cats Roundtable.”

“Now they’re afraid to go out because of crime. And I think that speaks to the broader range of people around the city no matter what their political affiliation is,” he said.

“Even if at times, if the public is getting more excited or more fearful than they should be, you still have to answer that feeling as a leader.”

Paterson, 68, said Hochul, 64, made a mistake of preemptively bashing the Long Island congressman’s pro-life abortion stance and his ties to ex-President Donald Trump, because “there is no such thing as bad publicity.”

Hochul’s focus on her legislative accomplishments in recent days had been more productive for her campaign, Paterson said.

Still, he warned the governor not to underestimate the public’s “anxiety” around rising crime, recalling how he believed the 1990 subway slaying of US Open fan Brian Watkins contributed to Mayor David Dinkins’ defeat years later.

“It was such a major issue in the city — the pain that family endured, and they were tourists coming to New York, that I think it actually contributed to the loss of Mayor David Dinkins when he ran against uh, the inevitable mayor, uh, [Rudy] Giuliani in 1993,” Paterson said.

The Harlem resident also said he now takes certain precautions that he didn’t employ when crime was much higher in the 90s — because violence now seems more randomized. The city reported 485 murders last year compared to 2,245 in 1990.

“There’s things that I do now to be more careful that I didn’t do 30 years ago, because that crime wave — even though we were having more than two thousand deaths from murder every year — was generated mostly by the infiltration of crack … in places that were compartmentalized. You knew where it was,” Paterson said.

Paterson said despite polls that show Zeldin surging, he believes Hochul will win by “6 to 10 points” on Election Day, because the GOP candidate is offering “reactions, not plans.”

He added that Zeldin’s proposal to scrap Albany controversial bail reform law through an executive order would be illegal under the state constitution.

He withdrew from his bid for a full term early in the 2010 race, paving the way for Andrew Cuomo to cruise to three consecutive victories at the ballot box. Cuomo resigned last year, and Hochul, his lieutenant governor, took over. 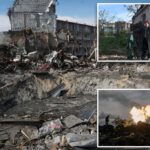 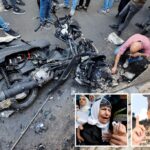