A former CNN producer pleaded guilty to a child sex charge on Monday for sexually assaulting a 9-year-old girl after luring her to his Vermont ski house.

Griffin, of Stamford, Connecticut, met a woman online and persuaded her to bring her 9-year-old daughter to his $2.5 million Vermont cabin where he engaged in sexual activity with the child, according to prosecutors.

Griffin paid the mother $3,000 to fly from Nevada to Boston in July 2020, where he picked them up in a Tesla and drove them to his Ludlow, Vermont house, where he directed the young girl to engage in unlawful sexual activity.

The former producer asked the parents of several minors to bring their daughters to his home for “sexual subservice” training and allegedly bragged about luring girls as young as 7 to his pad.

He told the parents he believed that a “woman is a woman regardless of her age” and that as such, all women should be sexually subservient and inferior to men, prosecutors said.

Griffin tried to get other young girls to do sex acts for him through their parents, according to court documents.

In April 2020, he suggested to the mother of a 14-year-old girl that she and her daughter do a “virtual training session” over video chat in which he would instruct the pair to undress and touch one another at his direction.

Two months later he tried to persuade a woman and her 16-year-old daughter to take a “little mother-daughter trip” to his ski house for sexual training.

He attempted to lure the girls to his Vermont ski house for “training sessions” on such things as “spanking” and “c–k worship,” prosecutors said in court documents.

Griffin, who has three children of his own, was arrested on Dec. 10, 2021 and originally pleaded not guilty to three counts of enticement of a minor. He was fired by CNN — where he worked for about eight years — following his arrest, the network stated at the time.

He faces a minimum of 10 years and a maximum of life in prison at his sentencing on March 20 and must pay full restitution — in an amount yet to be determined by the court — to the victims.

Griffin also faces a fine of up to $250,000 and has agreed to forfeit his Tesla and to donate half of the proceeds from the sale of his Vermont ski home and a Mercedes into the court registry.

He will likely be ordered to register as a sex offender and must participate in treatment.

The New York Post reporter has no relation to John Griffin. 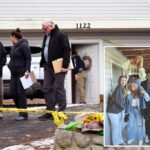 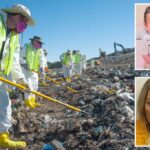