The man once considered a person of interest in the murder of his ex-girlfriend and three other University of Idaho students is crushed he “lost the love of his life” — and devastated that some consider him a suspect in the slaughter, a family member told The Post.

Speaking publicly for the first time, Brooke Miller said her nephew, Jack DuCoeur, is currently “surrounded by family and friends” as he grieves Kaylee Goncalves‘ murder.

“He’s not only lost the love of his life, and what we all thought and he probably thought as well, would be his future wife — you know, get married and have kids and all of that,” but also, “half of America” thinks he could “be responsible” for the heinous killings, said Miller.

DuCoeur, 22, and Goncalves, 21, had been dating for five years when she broke things off with him just three weeks before she was murdered.

“Obviously he was sad, but they were still friends,” said the aunt, who would only say that Goncalves “was planning on moving away,” and their split was “amiable.”

DuCoeur, who is a mechanical engineering major at the university, was initially considered a person of interest in the Nov. 13 murders of Goncalves, her two roommates, Madison Mogen, 21, and Xana Kernoodle, 20, and Kernoodle’s boyfriend, Ethan Chapin, 20, authorities said.

In the hours before their deaths, Goncalves and Mogen tried to call DuCoeur a total of 10 times, but he didn’t answer.

Police in Moscow, Idaho, later said they’d “looked into” and “cleared” the phone calls, and on Nov. 23, declared DuCoeur was no longer considered a suspect.

“Detectives do not believe the male Kaylee and Madison attempted to contact numerous times on November 13th is involved in this crime,” Moscow police wrote on Facebook.

But many Internet sleuths have pointed the finger at DuCoeur as the killer anyway.

In a YouTube video posted by the account Reporter Room on Thursday, host Jessica de la Davies pointed out DuCoeur’s “red flags” in regards to the case — noting that he and Goncalves had recently broken up, and that the dog they bought as a couple did not alert to an intruder and was not harmed.

After mentioning Goncalves’ plan to relocate, Davies said, “we all know the most dangerous time for a woman is when she is trying to leave.”

“They’re just the most ridiculous conspiracies,” Miller said in response to the online claims vilifying DuCoeur.

Goncalves’ mother, father and sister have publicly stated their support for DuCoeur since her death.

“We all know, beyond a shadow of a doubt, that there’s no way that Jack would ever do anything like that to anybody,” his aunt said.

DuCoeur now owns the fluffy golden pooch, Murphy, whom he and Goncalves had bought as a couple. The dog, who lived with Goncalves, was found unscathed at the crime scene by police, and initially turned over to Animal Services.

DuCoeur, of Coeur d’Alene, Idaho, is struggling at the thought of returning to the University of Idaho,

“it’s hard for him to think about going back to Moscow because his life there was very involved with Kaylee’s,” Miller said.

Miller started a GiveSendGo on Dec. 6, with the goal of raising $20,000 so that “Kaylee’s family will be able to hire a private investigator, get expert legal advice, etcetera,” she said. So far, $17,212 has been collected in donations.

Six weeks after the gruesome slayings, the Moscow Police Department still doesn’t have a suspect in the case.

“The very last thing that this family wants to happen is for it to become a cold case,” Miller said.

The Goncalves family declined The Post’s request for comment. 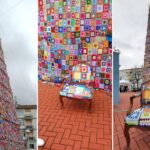 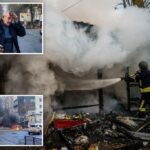 At least 7 dead, 58 injured after Russian shelling in Kherson