A tone-deaf Ghislaine Maxwell says the young women she sex-trafficked to Jeffrey Epstein should turn their anger to authorities — because they “allowed” the notorious pedophile to kill himself in custody.

The 61-year-old madam didn’t apologize to any of the sick pair’s victims during an interview from the cushy Florida federal prison where she is serving 20 years for helping her perverted ex abuse them.

Instead, in a teaser from her chat with Britain’s TalkTV — set to air in the UK late Monday — Maxwell appears to try to divert attention to the scandal of Epstein’s suicide rather than apologize for her own role as his madam.

“I say that Epstein died, and they should take their disappointment and upset out on the authorities who allowed that to happen,” Maxwell said while filmed on a prison phone.

“And, as I said, I hope that they have some closure by the judicial process that took place,” she said.

Her comments will likely only fuel conspiracies that Epstein’s powerful enemies allowed his August 2019 death in his Manhattan lockup while awaiting trial on serious sex charges in the case.

In an earlier interview — in which she also recalled her “special friendship” with former President Bill Clinton — Maxwell claimed that ex-lover Epstein’s “unexplained death is profoundly suspicious.”

In the TalkTV interview, Maxwell seemed to want everyone to know that she is nothing like the way she has been portrayed in public.

“I feel completely divorced from the person that people referenced and talk about in all the various newspaper articles and TV shows and podcasts,” she maintained, speaking with a slight lisp.

Maxwell also discussed other conspiracies in her background — including the now-notorious photo of her with close pal Prince Andrew and the sex accuser he settled with, Virginia Roberts Giuffre.

The fallen socialite claimed that the photo is a fake, as her prince pal also alleged during a disastrous BBC interview that led to him being booted from royal duties.

“It is a fake. I don’t believe it is real for a second — in fact I am sure it is not,” Maxwell said of the infamous snap.

“There’s never been an original. … I’ve only seen a photocopy of it,” she claimed.

The interview comes amid reports that Andrew has consulted lawyers to see if he can overturn his settlement with Giuffre, who dropped a similar claim against lawyer Alan Dershowitz, admitting she “may have made a mistake.”

“I can tell you with confidence that Prince Andrew’s team is now considering legal options,” a source told The Mail on Sunday.

“This isn’t about the money. He wants a route back to some sort of normality after a deeply trying period,” the source said.

In her TalkTV interview, Maxwell said her royal pal should be “uplifted” by the collapse of the Dershowitz case, according to The Telegraph.

Giuffre repeatedly accused Maxwell and Epstein of making her have sex with Andrew at least three times, starting when she was 17 in 2001.

The prince has repeatedly denied her allegations but agreed as part of his settlement to no longer accuse her of lying. 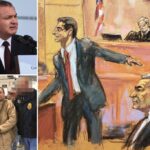 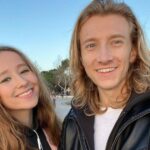 Are Steven and Alina Still Together?