Defending her friend. Emmy Rossum clapped back at a rude comment about Hilary Swank’s age after the actress announced she is pregnant with twins.

The Million Dollar Baby star, 48, shared a photo cradling her growing baby bump via Instagram on Wednesday, October 5, and a user responded, “AREN’T YOU LIKE 50 YRS OLD. Gonna be in your 70s when they graduate college. MIGHT live to see their wedding, maybe.”

Emmy, 36, who costarred with Hilary in You’re Not You, responded, “Gfy,” which is known to be an abbreviation for, “go f–k yourself.”

Hilary surprised fans when she revealed that she is pregnant and expecting twins with her husband, Philip Schneider, during an appearance on Good Morning America shortly before her social media post.

“This is something that I’ve been wanting for a long time and my next thing is I’m going to be a mom,” the Nebraska native, who is in her second trimester, gushed over this next chapter in her life. “And not just of one, but of two. I can’t believe it.”

That being said, the P.S. I Love You star is extremely grateful about her “miracle” pregnancy. “It’s such a blessing,” she continued. “It’s unbelievable.”

The Freedom Writers actress opened up more about pregnancy later that day on Live With Kelly and Ryan. “My clothes started not to fit so I had to, the other day … cut [my jeans] open,” the Alaska Daily actress said with a laugh, adding that she simply accessorized with a jacket.

The Mission Statement founder previously acknowledged that she wanted to start a family of her own during an interview with InStyle in 2010 but said she was waiting until “the time is right.” Years later, she found her perfect match with Philip, 49.

Hilary and the businessman got engaged in 2016 and wed in August 2018 during a gorgeous ceremony at Saint Lucia Preserve in California. Their nuptials came four years after they were set up on a blind date by their mutual friend Vicki, who is married to actor Misha Collins. Hilary was previously married to her first husband, Chad Lowe, from 1997 until their divorce was finalized in 2007.

The Hunt actress said it “took a long time to get the right guy” during an interview with People in 2019, but Philip was clearly worth the wait. 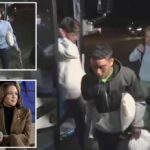 Migrants dropped off in NY, near VP Harris’ residence in DC 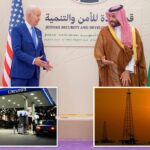