The fatal shooting of a terminally ill man in Florida was part of a failed murder-suicide pact with his wife, authorities have revealed.

Ellen Gilland, 76, is accused of gunning down her bedridden husband, Jerry Gilland, at AdventHealth Hospital in Daytona Beach around 11:30 a.m. Saturday — before she was arrested.

According to investigators, the Gillands had made a pact to carry out a murder-suicide if Jerry’s health continued deteriorating.

“The goal was for him to do it, but he did not have the strength, so she had to carry it out for him,” Daytona Beach Police Chief Jakari Young said Sunday, as reported by ClickOrlando.

Ellen allegedly told officers that her husband, 77, had been ill for some time, and that the two of them had planned the murder-suicide three weeks ago, reported the station WESH.

After allegedly shooting dead her sick husband, Ellen barricaded herself inside his room, refusing to come out until 3:30 p.m., authorities said. She was taken into custody after SWAT officers used a flash bang device to distract her and shot her with a beanbag.

The Gillands were alone in his hospital room at the time of the shooting and no one else was harmed.

Part of the hospital was evacuated and some doctors, nurses and others took cover in locked closets and rooms during the hours-long standoff that followed.

Young said that although Ellen never threatened to shoot any of the responding police officers, she also never put the gun down. Fearing a potential shootout, the SWAT team that was called to the scene deployed the flash bang and beanbag, after which she was arrested, bringing the four-hour standoff to a close.

Ellen made her initial court appearance Sunday to face a charge of first-degree premediated murder and three counts of assault with a deadly weapon. 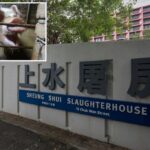 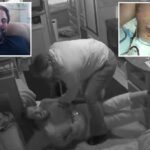