Authorities in El Paso have been tearing down migrant encampments under cover of darkness and dispatching hundreds of migrants across the border to Mexico ahead of President Biden’s scheduled Sunday visit to the overwhelmed border town.

Encampments near the downtown bus station and the Sacred Heart Church, which operates a shelter, have been dismantled by local authorities over the last two nights as the city prepares to host President Biden’s first visit to the southern border, according to a photographer for The Post who witnessed it.

“El Paso being cleaned up as if nothing unusual ever happened there. Just in time for Biden’s ‘visit to the border,’” tweeted the Border Patrol Union. “We suggest landing in Des Moines, Iowa and telling him it’s El Paso. He’ll never know the difference.”

The Border Patrol Union has complained of low morale among frontline agents who have had to deal with an historic number of migrants crossing the southern border in fiscal 2022. More than 2.4 million migrants have crossed along the nearly 2,000 mile border with Mexico, with tens of thousands pouring into El Paso in recent weeks.

The situation grew so chaotic, with thousands of migrants crossing into El Paso every week, that Oscar Leeser, the mayor of the border city of more than 670,000 residents, called a state of emergency last month.

“El Paso clears downtown of expansive migrant camps ahead of Biden visit,” tweeted Republican Congresswoman Mayra Flores, who represents South Texas. “Why not show him what our border community and law enforcement officials are dealing with on a daily basis.

Throughout the week, migrants huddled near the Sacred Heart church, worried about being shipped back across the border, according to a local report. Police as well as Texas Department of Public Safety officers and US Border Patrol patrolled the downtown area where migrant encampments had been set up, according to the El Paso Times. The patrols began to increase Tuesday night, and have continued through Saturday.

“CBP, which is responsible for securing the US border between ports of entry, uses a layered approach that included patrolling the border itself, nearby areas, and neighborhoods, and conducting checkpoints — both stationary and temporary,” said a spokesman for US Customs and Border Protection. “In response to migrants evading apprehension in the El Paso area, the United States Border Patrol has increased the number of agents patrolling the area.”

The agency did not say how many migrants had been detained in the roundups.

El Paso police did not immediately return a request for comment Saturday nor did the Texas Department of Public Safety. 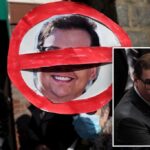 What happened between Matt Gaetz and Mike Rogers in the House