The “Beverly Hills Cop” legend, 61, was presented with the Cecil B. DeMille Award for “outstanding contributions to the world of entertainment” and brought the house down as he ended his speech with a joke at Smith’s expense.

After giving a somewhat subdued address reflecting on his four-decade career, the funnyman signed off by saying he had advice for young actors looking to achieve success.

“I want to let you know that there is a definitive blueprint that you can follow to achieve success, prosperity, longevity and peace of mind,” Murphy softly stated. There’s a blueprint, and I followed it my whole career. It’s very simple, it’s three things. You just do these three things: Pay your taxes. Mind your business … And keep Will Smith’s wife’s name out of your f- -king mouth!”

Murphy rose his voice when delivering his final piece of advice, mimicking Smith’s on-stage tantrum that overshadowed last year’s Academy Awards. During that event, the “Men in Black” star stormed the stage, slapping comic Chris Rock who had made a joke about Jada Pinkett Smith’s alopecia.

Celebrities were seen in hysterics after Murphy’s gag, giving the star a standing ovation as he left the stage.

Twitter users were similarly tickled, with one fan fawning: “Eddie Murphy would be the only person to make a Will Smith joke that was actually funny.”

Another viewer cheered: “Eddie stole the show. A legend forever.”

However, Murphy wasn’t the only person at the Golden Globes to reference Smith’s slap.

At one point during the broadcast, host Jerrod Carmichael quipped: “While we were on commercial, we actually presented Will Smith with the Rock Hudson award for best portrayal of masculinity on television, so please give it up for Will Smith. Please! Please!” 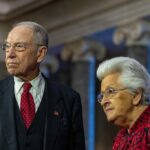 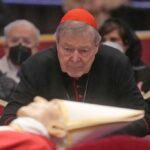