Flooding and mudslides continued to batter California Saturday, but the onslaught of wind, rain and snow that has pummeled the Golden State over the past three weeks is expected to dry up in the coming days.

The hardest hit region Saturday was south of San Francisco, where mudslides closed roads in Fremont, while the tiny community of Felton Grove along the San Lorenzo River was ordered evacuated. Large parts of San Mateo and Santa Cruz counties were also under flood warnings, and the swollen Salinas River swamped farmland in Monterey County.

Flooding was also reported in Marin and Napa north of San Francisco, and the community of Vina near Sacramento.

Two more storm systems are expected for the already-drenched state, with light rain likely on Sunday, followed by heavy rain with the potential for more flooding through Tuesday, according to FOX Weather senior meteorologist Greg Diamond.

Aside from a little more drizzle and some snow across far Northern California on Thursday though, most soaked residents across the state can expect extended dry days starting mid-week.

“An end is in sight,” Diamond said.

Since late December, more than 30 inches of rainfall have poured on the state, with some estimates surpassing 40 inches near Santa Barbara, Diamond said.

The Sierra Nevada mountain range could get as much as four to seven feet of snow before it stops falling.

The UC Berkeley Central Sierra Snow Lab tweeted Saturday morning that it received 21.3 inches of snow in 24 hours and that its snowpack of about 10 feet was expected to grow several more feet by Monday.

The Sierra Avalanche Center issued a backcountry avalanche warning Saturday for the central Sierra, including the greater Lake Tahoe area.

Diamond noted while 26 million Californians were under flood Saturday, flooding was not expected to be as severe as the month’s earlier monster storms. Those resulted in nightmarish conditions, including flooded roads, sinkholes, and mudslides, forcing tens of thousands to evacuate.

At least 19 storm-related deaths were recorded so far. A five-year-old boy is still missing after being swept out of his mother’s truck by floodwaters.

There were 38,000 people across the state are without power as of Saturday afternoon, according to Poweroutage.us.

The torrential downpours, however, have brought some silver linings, Diamond said.

California no longer has any areas on the U.S. Drought Monitor with “exceptional drought” —the worst categorization— for the first time in almost three years, The Los Angeles Times reported. The IRS has also extended the deadline to file taxes to May 15 for any California businesses or individuals in areas under a federal emergency declaration.

The state meanwhile is seeing a record start to its snowpack, which is critical for the state’s water supply. Diamond said there are currently 30 inches of water locked up, or more than 220% above average for this time of year.

Gov. Gavin Newsom said on a Friday visit to Montecito that residents should listen to public safety officials’ caution.

“I know how fatigued you all are,” Newsom said. “Just maintain a little more vigilance over the course of the next weekend.” 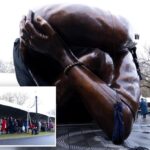 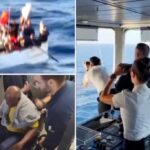