Former President Donald Trump filed a lawsuit against New York Attorney General Letitia James in Florida on Wednesday, accusing her of abusing her position to wage a “war of intimidation and harassment” against him.

The 41-page lawsuit filed in Palm Beach County, where Trump lives, accuses James of breaking the law in Florida and New York in her investigation into the former president’s business dealings, which he claims was politically motivated ahead of the 2022 midterm elections.

“What began as a cartoonish, thinly-veiled effort to publicly malign President Trump for personal political gain has morphed into a plot to obtain control of a global private enterprise ultimately owned by a Florida revocable trust in which President Trump is the settlor,” Trump’s attorneys wrote in Wednesday’s lawsuit.

She accused the former president and his Trump Organization of fraudulently inflating the value of his prized assets — including his homes and golf courses — to allegedly obtain favorable loans and tax benefits.

The lawsuit seeks to tear away Trump’s ability to run businesses in the Empire State and to prohibit him and his company from buying up commercial real estate for several years.

Trump announced the lawsuit himself on Truth Social Wednesday used the post to slam rising crime in New York.

“While James does nothing to protect New York against these violent crimes and criminals, she attacks great and upstanding businesses… which have done nothing wrong, like the very successful, job and tax producing Trump Organization that I have painstakingly built over a long period of years,” Trump said on his social media platform.

“Crooked and highly partisan James now thinks it is the business of the State of New York to go after my revocable trust and pry into my private estate plan, only to look for ways to recklessly injure me, my family, my businesses, and my tens of millions of supporters.

“If I were not elected President of the United States, and now leading in the polls by substantial margins against both Democrats and Republicans, this would not be happening.”

A spokesperson for James’ office noted that Trump’s previous two efforts to end the investigation were rejected.

“Multiple judges have dismissed Donald Trump’s baseless attempts to evade justice, and no number of lawsuits will deter us from pursuing this fraud,” the spokesperson told Axios.

“We sued Donald Trump because he committed extensive financial fraud. That fact hasn’t changed, and neither will our resolve to ensure that no matter how powerful or political one might be, no one is above the law.” 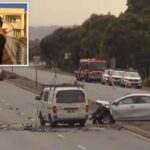