During Lisa Marie Presley’s funeral service, her daughter Riley Keough’s husband, Ben Smith-Peterson, sent rumors swirling that he and Riley welcomed a daughter, but does Riley have a child? Keep reading for everything we know.

Does Riley Keough Have a Daughter?

While reading a tribute from his wife, 33, onstage, Ben seemingly revealed that they have a child together.

When Did Riley Keough and Ben Smith-Peterson Get Married?

The Zola actress tied the knot with Ben in February 2015. The couple first met in 2012 on the set of Mad Max: Fury Road. However, they didn’t start dating until 2013.

Riley opened up about their romance in a May 2022 essay she penned for Vogue Australia.

“We shot Mad Max: Fury Road in Namibia, which is where I met Ben,” she explained. “He was on the stunt crew. I knew who he was, but I was in a relationship, so I wasn’t looking at anyone in that way.”

Riley added that they reunited “a year later” to “do reshoots in Sydney.”

“I was just out of a relationship that I needed to recover from, so definitely wasn’t looking for anything,” Elvis Presley’s granddaughter continued. “Ben was on set, and I saw him. It had been a year, and he just felt more grown up and there was something about him. I was like, ‘Oh wow.’ He felt so much more mature. We were in Fox Studios in Sydney. He came up to me and said, ‘Can I send you my music to listen to?’ and I said, ‘Sure.’ I told him, ‘I’m here for a month, I don’t have much to do … maybe you could teach me to surf?’ which is hilarious, because I’m so terrified of sharks and I would never surf now.

Do Riley Keough and Ben Smith-Peterson Have Other Kids?

The couple do not have any other children apart from the daughter Ben seemingly referred to. 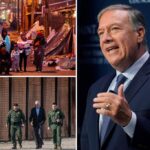 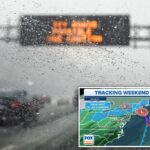