A woman who went viral for singlehandedly renovating her Florida waterfront house while her military husband was away is now picking up the pieces after Hurricane Ian ravaged their dream home.

“I’m thinking it’s probably a good three feet throughout the entire house,” Cori Bosco said of the water level in her Daytona Beach home, after picking up a U-Haul Friday to salvage what’s left of her belongings.

“So we are just trying to get everything out,” the mom of four told The Post. “The smell of mold is already awful. There’s like this black, I don’t even want to know what it is, covering the entire floor.”

Her family evacuated the ranch house on the Halifax River Wednesday night. On Thursday afternoon a friend went by to assess the damage.

“He opened the front door and it just came pouring out,” Bosco, 38, said. “He said that it was knee-high in the living room.”

A neighbor had been sending her updates on the storm. “He said that at one point he saw 6- to 10-foot waves going up over my boat dock,” she said. “And he said it was going up to the roof of my house as well.”

The Florida native decided to surprise her husband, Vinny, a special agent in the criminal investigations division of the Army Reserve, who was deployed to Washington, D.C., by renovating their entire home by herself.

She began sharing the labor of love on her TikTok handle @eastcoastdiy, and quickly gained 5.7 million followers.

Her popularity on the platform enabled her to quit her job as a physical education teacher in Dec. 2021 and become a full-time content creator.

Bosco completed the $100,000 renovation in February, in time for her hubby’s return on Valentine’s Day.

Her story was featured on “Rachael Ray” in December 2021 and then in March on “The Drew Barrymore Show.”

The social media star also chronicled her preparation for the storm, such as protecting important documents like birth certificates.

Bosco, her kids and her husband — who also works at the Seminole County sheriff’s office as a lieutenant and has been working in Ian’s aftermath — are staying with her mother in DeBary, 30 miles inland.

“Thank goodness I ended up evacuating and not staying there by myself, because there was nothing I could have done,” she said.

“Our family’s safe and good, so I guess we’ll end up building back bigger and better,” she said. 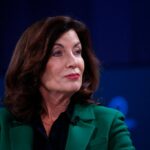 Gov. Hochul raised taxes many times while on Hamburg board 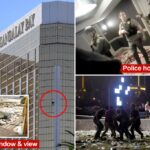