Disturbing video has emerged of two subway passengers punching and kicking each other — as other straphangers watch the brawl from a distance.

The roughly minute-long clip, which was originally posted Sept. 11, begins mid-fight with the barefoot biker — a man wearing a plaid shirt and green shorts — shoving his left thumb into the mouth of a man wearing what appears to be the uniform of water delivery company ReadyRefresh.

The biker gains the upper hand at first as he lands multiple blows, but the other combatant then pounds him with punches to the head as he crumples onto the seat and then with kicks to the back and side.

After more than 30 seconds, with the biker seemingly defenseless and covering his head, someone is heard saying, “Enough, enough.”

Finally, the fight comes to an end at the 40-second mark.

The video gained traction online Monday when it was reposted by the Twitter account @RibleBlockMedia, where several users commented on the incident.

“Why is it always no one coming to a black man’s defense when he doesn’t have the upper hand but once them tables turn it’s that’s enough…. No it’s not enough,” one wrote, referring to the man in the delivery uniform.

“Started off with the fish hook, extremely bold strat,” another user said, referring to the thumb-in-mouth move by the biker.

The identities of the two men were unavailable.

The NYPD did not immediately respond to an inquiry about the incident.

The alarming video emerged soon after Gov. Kathy Hochul pivoted her election campaign message to focus on crime, announcing a new subway safety plan with Mayor Eric Adams and releasing a commercial in which she said New Yorkers “deserve to feel safe.”

On Tuesday night, Hochul won a full term despite a surprisingly strong race run by longshot Republican challenger Lee Zeldin — who refused to concede the election. 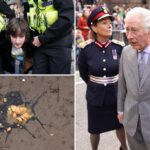 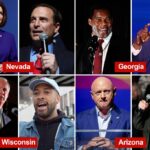 Where Senate elections stand as results come in for key races