Is it over? 90 Day Fiancé alum Kalani Faagata seemingly hinted that she split from husband Asuelu Pulaa after she moved from Utah to California.

“Life looks a lot different than what I had planned,” the mom of two, 34, shared via Instagram on Sunday, November 13, alongside a compilation of photos and videos of fun outings with her two sons. “Here’s to us learning to go with the flow.”

The TLC alum’s cryptic message follows months of speculation that the former 90 Day Fiancé couple have gone their separate ways. While the reality TV duo has yet to confirm their breakup, the California native’s comment section was filled with support, including former 90 Day Fiancé: Happily Ever After? costar Loren Brovarnik.

“I love you. Period,” the 90 Day Fiancé: Pillow Talk alum penned under the post. Meanwhile, another fan wrote, “You can do it! I did it with 2 kids under 4. You’re killin’ it!”

Kalani and Asuelu — who share sons Oliver, 4, and Kennedy, 3 — first sparked split rumors in June, after the Samoa native shared a lengthy message on why his wife was absent from his social media.

“[She] don’t wanna join my Live, she doesn’t want film TikTok with me. She’s different from how she used to be. She doesn’t wanna go out with me. Everything she needs I supply for her, [especially] the boys,” he wrote in the caption of an Instagram video post of an old clip of Kalani and Asuelu dancing together.

That same month, news broke that the couple’s marital home in Washington, Utah, was placed for sale. The five-bedroom, four-bathroom home, which was purchased by Kalani and her father, Low Faagata, was initially listed for $589,000, and the price was later reduced three times before landing at $499,999 on August 12. According to the listing, the home is currently under contract.

While Kalani and her sons made the move from Utah to Irvine, California on November 11, Asuelu is seemingly in his home country.

“Surprise my family in Samoa,” Asuelu wrote alongside a video of his plane landing on the island on October 22. As of November 13, it appears he is still in Samoa. However, prior to his departure, he was seemingly preparing for the move himself and took to social media to slam trolls who claimed he wasn’t a “good dad.”

“This for all of you bitches that complain about my life,” the dad of two said in an Instagram Reel as he walked through a supermarket on October 5. “They say grow up, be a good dad, bitch I’m here, buying all the [groceries] buying all the food, buying everything for my family.” 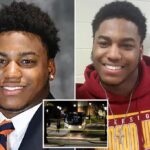 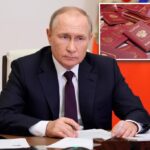 Putin to strip Russians of citizenship for criticizing army