Rocky romance. Teen Mom 2 star Leah Messer seemed madly in love with Jaylan Mobley before they announced their split in October. Keep reading to find out everything we know about the breakup.

Just days after Leah and Jaylan announced their split, rumors began to circulate that the couple called off their engagement due to his infidelity.

A source told The Sun that Leah found materials that suggested Jaylan had been unfaithful during their relationship, which was “hard” on the reality star.

On October 17, Leah took to Twitter to address the speculation surrounding the split. “While y’all are tripping on what the reason for the breakup is, we’re solid,” she wrote. “Refocusing and transitioning into better days ahead of us.”

When Did Leah Messer and Jaylan Mobley Breakup?

The MTV stars announced their split on October 11, just two months after their engagement.

“While the last year has been tremendously exciting for both of us, we’ve realized that it’s best we walk separate paths. We are so grateful for the lessons, growth, and memories we’ve had in this relationship,” Leah and Jaylan said in a joint statement to In Touch. “So many of you have watched our love story unfold, and we hope that you’ll continue to watch our stories while we move forward as friends.”

How Long Were Leah Messer and Jaylan Mobley Together?

The mother of three revealed that Jaylan popped the question in August during their one-year anniversary trip to Costa Rica.

Even before the proposal, the pair had taken a major step in their relationship by purchasing a new house together in April. In Touch exclusively revealed that the house was bought in the U.S. Army Officer’s name.

On October 13, Jaylan was spotted moving his belongings out of the house and into moving trucks.

Sources told TMZ that he was moving into an apartment about 45 minutes away from the home he shared with the TV personality. Meanwhile, Leah is expected to stay in the house with her three kids.

What Did Leah Messer Say About Living With Jaylan Mobley Before Their Split?

Leah exclusively spoke to In Touch about how her daughters adjusted to living with Jaylan during a video interview in August. “It just happened naturally,” she said at the time. “I think that if it would’ve happened any other way, maybe we would’ve reevaluated everything and talked to each other about it.”

The West Virginia native also shared her thoughts on having kids with Jaylan. “All I know is that we love each other and at the end of the day, that’s the foundation I wanna set for our relationship, my kids, our future kids,” she said. “And that’s kinda where we’re at.” 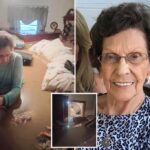 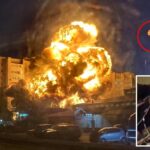