Speaking out. Cory Hardrict responded to rumors he cheated on Tia Mowry amid news of their divorce.

Under his latest Instagram post promoting season 2 of the series All American Homecoming, fans took to the comment section to speculate on the reason behind his legal separation from his wife.

“He cheated on her,” one troll commented under his post. On October 5, Cory, 42, slammed the rumors and replied, “Lies.”

The Twitches star, 44, announced she was filing for divorce on Tuesday, October 4, after 14 years of marriage. The actress cited “irreconcilable differences” and requested joint physical and legal custody of their children, Cree, 11, and Cairo, 4, according to court paperwork obtained by In Touch.

The actress also asked the judge to terminate spousal support and noted the couple has a prenup in place. Following the filing, The Game star took to social media to update her fans.

“I have always been honest with my fans, and today is no different. I wanted to share that Cory and I have decided to go our separate ways. These decisions are never easy, and not without sadness,” Tia wrote via Instagram. “We will maintain a friendship as we co-parent our beautiful children. I am grateful for all the happy times we had together and want to thank my friends, family and fans for your love and support as we start this new chapter moving forward in our lives.”

That day, the Netflix star also shared a cryptic quote via her Instagram Stories that read, “Letting go can be painful. But it won’t hurt as much holding on to an illusion.” Her former husband shared a subliminal statement of his own that read, “Acting off of emotions will cost you every time.”

Tia and Cory met in 1999, one year after the Sister, Sister star wrapped up the hit series. After tying the knot in 2006, the pair welcomed their son Cree in 2011 and daughter Cairo in 2018.

The former couple seemed to be on good terms following the family’s summer trip to Italy in July. The Rosewood actress shared adorable moments of the pair lovingly holding hands while their kids ate gelato.

“Mom and Dad take on Europe!” Tia wrote in the caption. “I love traveling the world with you, @coryhardrict.”

Reps for Tia and Cory did not immediately respond to In Touch’s request for comment. 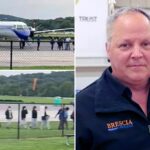