​Fresh off his landslide reelection victory, Florida Gov. Ron DeSantis received a rousing round of applause at a Republican gubernatorial gathering Tuesday evening, moments before former President Donald Trump took the stage at his Mar-a-Lago resort to announce he was running again in 2024. ​​

DeSantis, widely expected to be the 76-year-old Trump’s toughest rival for the Republican nomination, highlighted his “impressive reelection campaign” and how he flipped the Democratic stronghold of Miami-Dade County by reaching out to Hispanic voters, Fox News reported Wednesday.

DeSantis got an “enthusiastic” response from the crowd as he “recapped the Florida blueprint and the path to winning Hispanics, women, and independents​,” the outlet said.

The crowd reportedly appeared energized about applying DeSantis’ winning strategy to battleground states across the country.

But DeSantis, a former congressman who saw his star rise nationally in his four years as governor, did not mention the former president in his remarks, with one person telling Fox News that Trump “was not even a topic of discussion.”

About 170 miles to the southeast in Palm Beach, Trump promised his supporters at Mar-a-Lago that he would make America “great and glorious again,” despite the poor showing of candidates he endorsed at the ballot box Nov. 8.

The former president ignored calls from a number of Republican leaders to postpone his announcement until after the Dec. 6 runoff election between Sen. Raphael Warnock and Herschel Walker, a candidate Trump backed, so it wouldn’t influence the race.

Democrats held on to their narrow majority in the Senate, and Republicans were hoping to keep them from gaining 51 seats in the chamber if Walker could knock off Warnock.

In the House, Republicans are predicted to win a one-seat majority.

Trump dismissed the GOP’s underwhelming show in the midterms by saying House Speaker “Nancy Pelosi has been fired.”

Trump also took a shot at those who could challenge his White House bid.

The task of “taking on the most corrupt forces and entrenched interests imaginable” was “not a task for a politician or a conventional candidate. This is a task for a great movement,” he said.​

Earlier Tuesday, DeSantis, who had been dubbed “Ron DeSanctimonious” by Trump, was asked by a reporter to respond to Trump’s “less than flattering” comments about him and the highly anticipated announcement that night.

DeSantis chalked the criticism up to “noise.”

“I don’t think any governor got attacked more, particularly by corporate media, than me over my four-year term,” he told reporters at Fort Walton Beach High School.

“What you learn is all that’s just noise. And really what matters is are you leading? Are you getting in front of issues? Are you delivering results for people? And are you standing up for folks? And if you do that, then none of that stuff matters,” he said.

Addressing doubters — without mentioning Trump by name — about his blueprint for ​victory, he said: ​”​at the end of the day, I would just tell people to go check out the scoreboard from last Tuesday night.” 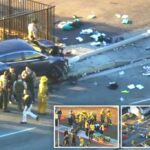 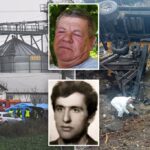