A Democratic congressional candidate from Louisiana has gone viral for releasing a campaign ad featuring herself giving birth – as she took aim at the state’s strict abortion ban.

She is first seen pregnant on her farm in St. Tammany Parish with her husband, John, and 6-year-old daughter, Remy, as she talks about Louisiana’s abortion ban.

“We should be putting pregnant women at ease. Not putting our lives at risk,” the longshot candidate in the Republican stronghold says.

The video then shows her giving birth to the couple’s second child, Ollie, who she then cradles on her breast in the intimate ad, which quickly generated hundreds of thousands of views.

“I think there are a lot of folks who connect with having a family and dealing with the challenges we face in Louisiana – climate change, education and a severe abortion ban,” Darling told USA Today Network.

“That’s why the ad is resonating with so many people,” the tech company executive added.  “We knew it would take a special message so we were thoughtful and mindful of the content and its importance.”

Darling said she decided to run for office in the wake of the US Supreme Court’s reversal of Roe v. Wade.

“Reproductive rights and health is the foundation of my campaign,” she told the news outlet.

In the ad, Darling says: “These days I worry about storms that are stronger and more frequent because of climate change, about our kids’ underperforming public schools and about Louisiana’s new abortion ban, one of the strictest and most severe in the country.” 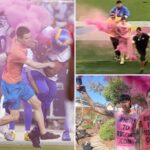 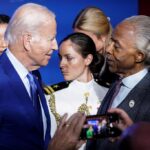