Instead of the boom of celebratory fireworks at midnight in the capital Kyiv, Ukrainians were met with piercing air raid warnings as Russian rockets and drones rained down in attacks that Ukrainian officials said are deliberately targeting civilians to instigate fear and erode morale.

The bombardment has been nearly unabated since Thursday when Moscow began launching airstrikes to damage Ukraine’s power and water facilities, part of a campaign started in October to increase the suffering of Ukrainians during the winter.

Blasts could be heard around Kyiv on Saturday and throughout the night as officials reported damage to several residential buildings in the capital, including two schools, and windows were blown out of a children’s hospital in Kherson.

When the shells struck the hospital, surgeons were operating on a 13-year-old boy who was seriously wounded in a nearby village earlier in the day, Kherson Gov. Yaroslav Yanushevych said. He had to be transferred to another hospital about 62 miles away in Mykolaiv.

At least three people were killed in the shelling across Ukraine and scores of others were wounded.

Oleksander Dugyn and his friends and family in Kyiv watched as Ukrainian air defense forces zeroed in on the Russian drones and missiles in the night sky.

Ukraine’s air command said it had destroyed 45 Iranian-made drones in 24 hours — 13 on Saturday and 32 since mid​night Sunday.

​In the midst of the assault, Zelensky and President Vladimir Putin addressed their people in speeches on New Year’s Eve.  ​

The Russian leader couched his war against Ukraine, which he launched nearly a year ago on Feb. 24, as a fight for the “fate of Russia.”

“Defense of the fatherland is our sacred duty to our ancestors and descendants. Moral, historical righteousness is on our side,” he said as he stood in front of a group of people in military uniforms.

He said the intent of the US and Western nations is to use Ukraine to “weaken and split Russia.”

Zelensky, speaking as a Ukrainian flag flew behind him, addressed the Russian people in their own language.

“Your propagandists lie,” he said. “All this war that you are waging … is for one person to remain in power for the rest of his life.”

Looking back on 2022 since the Russian invasion began, Zelensky ​proclaimed: “It was our year.”

“It was dark. It was loud. It was hard for many and scary for some. Three hundred eleven days have passed. It can still be dark, loud, and complicated for us. But we will definitely never be afraid again. And we’ll never be ashamed,” Zelensky said. “It was our year. The year of Ukraine. The year of Ukrainians.”​

As Zelensky spoke, ​people shouted “Glory to Ukraine. Glory to heroes” from their balconies.

Still, others’ thoughts went to those serving on the front lines.

“Of course it was hard to celebrate fully because we understand that our soldiers can’t be with their family,” Kyiv resident Evheniya Shulzhenko said. 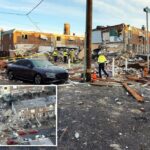