Not having it. 90 Day Fiancé alum Deavan Clegg slammed social media trolls who accused her of keeping ex-husband Jihoon Lee away from their son, Taeyang, amid his ongoing battle with childhood cancer.

“I feel terrible for what’s going on with this child,” one follower commented on Deavan’s Instagram on Friday, December 23, under a photo of Taeyang and sister Drascilla meeting Santa. “How could you take your son to see Santa, over finding away for his REAL DAD to come see him? [sic]”

The mother of three, 26, did not take kindly to the user’s remarks as she responded, “That’s Jihoon’s responsibility not mine. We did our part times 100!”

“My child is sick, we don’t need this negativity. [If] Jihoon wanted part in that, he would get on a flight,” she continued.

Deavan – who was first introduced to TLC viewers on season 1 of 90 Day Fiancé: The Other Way – is no stranger to receiving hate comments on her social media accounts. Earlier that day, she clapped back at another troll who claimed Jihoon was being “deprived the right” of seeing Taeyang.

“He has virtual visitations that he has never exercised and can come here,” Deavan clarified. “We have spoken to him, and he has made it very clear he wants no involvement. He told us he wants to live his single life.”

She went on to claim that her ex – whom she met on a dating app before moving to South Korea in order to be with – has not supported their son financially throughout Taeyang’s illness.

“He hasn’t paid child support, he hasn’t helped with medical [bills], can’t even share the GoFundMe,” she continued. “[He] threw out all of Taeyang’s stuff. He never showed up for virtual court. [The] judge gave him an entire year and he never did anything.”

Despite not having his biological father in the picture, Deavan says that Taeyang’s “bond” with her boyfriend, Christopher Park, “is so tight.”

“He has his dad next to him,” she wrote, referring to Topher. “They love each other so much, it’s so heart warming [sic].”

The former reality star’s 3-year-old son was diagnosed with childhood cancer in May 2022.

“I’m overcome with so much emotion and devastation to announce that my beloved son Taeyang, who just celebrated his third birthday last week, was just diagnosed with childhood cancer,” Deavan wrote via Instagram on May 31. “He has already undergone multiple procedures and started chemotherapy treatment just two days ago.”

In the months that followed, the Utah native has updated fans throughout Taeyang’s battle, including on Thursday when he spoke for the first time in days.

“After taking out his feeding tube because of complications. He all the sudden is speaking and playing. We are overjoyed,” she shared via Instagram. “We don’t know what happened, but we are happy. … This morning we were terrified. But by some miracle he is doing so much better in just the last 20 minutes.” 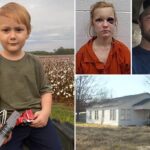 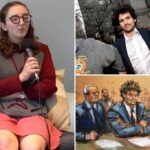