During its primetime on the air, Glee was one of the most popular shows around — but even before it went off the air, its cast faced a serious tragedy with Cory Monteith’s death in 2013. Since the series ended, the stars have survived other tragedies and even more controversies, such as the allegations against Lea Michele.

Multiple cast members have come forward with claims that the Broadway star bullied them on the set of the musical comedy show. In November 2022, Kevin McHale and Jenna Ushkowitz, who portrayed Artie and Tina in the series, respectively, opened up to Us Weekly about “the Glee curse and the deaths of [their] friends and some of the on-set drama that you hear.”

“We all come from different backgrounds and different experiences, and there were definitely moments of, like, ‘Is that normal?’” McHale said, referring to Lea’s work ethic on the set. “But we didn’t necessarily know any better and we were all learning together.”

The accusations against Michele first began in June 2020 by Samantha Marie Ware, who tweeted that the Funny Girl star made her life at work “a living hell” in response to Michele’s retweet of a Black Lives Matter post.

“I BELIEVE YOU TOLD EVERYONE THAT IF YOU HAD THE OPPORTUNITY, YOU WOULD ‘S—T IN MY WIG!’” Ware wrote via Twitter at the time. “AMONGST OTHER TRAUMATIC MICROAGGRESSIONS THAT MADE ME QUESTION A CAREER IN HOLLYWOOD.”

Although Michele apologized for her behavior, she also claimed she didn’t recall the past allegations. Shortly afterward, several other actors later joined the online conversation to accuse her of similar crude behavior.

Aside from the drama between Michele and her former costars, Glee also suffered several deaths among its cast. In addition to Monteith’s passing, Naya Rivera’s death shocked the world in July 2020.

That month, Rivera went on a boating excursion in Lake Piru, California, with son Josey Dorsey, whom she shared with ex-husband Ryan Dorsey. The Ventura County Sheriff’s Office told In Touch at the time that authorities discovered her son after being adrift for several hours, and then conducted a search for Rivera.

On the seventh anniversary of Monteith’s death, Rivera’s body was recovered on July 13, 2020, and her death was ruled as an accidental drowning.

Rivera’s former castmates took to social media to share their love and messages of hope at the time.

Scroll through the gallery to look back at Glee’s tragedies and controversies. 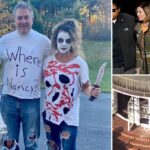 NJ candidate wears shirt reading ‘Where is Nancy’ for Halloween 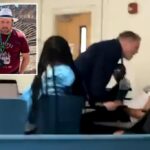