One of the surveillance cameras shows a bolt of lightning striking near a white Chevy truck parked in the lot.

The frame is taken over by a blinding white light as the lightning bolt illuminates the area.

As the light begins to recede, the lightning bolt can be seen making contact with the ground, creating a cloud of sparks larger than the vehicles nearby.

Electricity from the bolt also jumped to a metal gate nearby as sparks flew around it.

Then as quickly as it came, the lightning retreated into the sky, leaving behind smoke and residual sparks from its strike.

It appears as though the lightning may have also turned on the truck’s headlights.

As the light recedes, all that remains are sparks and smoke around the metal post. 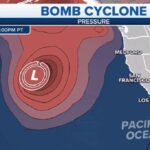