Behind bars. Teen Mom 2 alum and Jenelle Evans’ ex Courtland Rogers was arrested after allegedly strangling his estranged wife, Lindsey Rogers, in a domestic violence incident, In Touch can confirm.

Courtland, 36, was taken into custody on September 13 and charged with felony assault by strangulation, felony second degree kidnapping, felony violation of a domestic violence protective order, as well as misdemeanor interfering with emergency communication, misdemeanor assault with a deadly weapon and misdemeanor assault on a female, according to court dockets viewed by In Touch. The former reality star remains behind bars at the Brunswick County jail in North Carolina. His bond is set at $500,000 and he is due back in court on November 3.

The North Carolina native was taken into custody just two days after he raised concern among fans when he shared a series of cryptic posts via Facebook.

“I can’t do this. I’m sorry,” he wrote on September 11. Just two days later, on the afternoon of his arrest, he shared, “Somebody please God help me.”

“My wife committed adultery on me recently, and now she’s trying to say I tried to kill her so that I get arrested and go away for a long time,” Courtland wrote prior to being arrested. “I swear to God that I have PROOF AND ALL THE EVIDENCE I NEED TO PROVE SHE’S MAKING THIS UP. I AM SO DEPRESSED AND I NEED PRAYERS BECAUSE I DON’T DESERVE THIS.”

After Starcasm, who was first to break the news of his arrest, tweeted about his social media activity the following day, Courtland’s wife responded by calling her estranged husband a “monster.”

“Framing him?? Lol I managed to get out of the front door and ran for my life 3 houses down who called 911 for me,” Lindsey tweeted on September 15.

The former reality star has had a series of run-ins with the law, including his latest arrest in January 2020. Courtland was arrested in New Hanover County, North Carolina, for felony possession of cocaine as well as misdemeanor simple possession and possession of drug paraphernalia. He ultimately pled guilty and was sentenced to 9 to 20, followed by two years of probation. Court was released on May 6, 2021.

Courtland and Teen Mom alum Jenelle, 30, began dating in 2012. The pair were engaged and married by December of that year. Their relationship was short-lived, however, and their divorce was finalized in 2014.

Courtland moved on and married wife Lindsey in January 2018. The two share sons, Camryn and Kash. 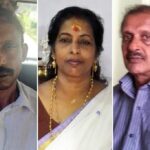 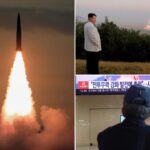