A cold-hearted crook stole a van from an Illinois funeral home — then dumped a corpse that was in the back more than 100 miles away in a Chicago alley, according to cops.

The vehicle, which had the body of an unidentified man in the back, was stolen on Saturday afternoon from Collins & Stone Funeral Home in the city of Rockford, police said.

The van turned up the next day in Chicago — but without the corpse inside, cops said in an updated alert.

Late Monday — almost a day after the van was found — police said that “the body of the deceased man from the stolen van was located” in South Chicago, a two-hour, 104-mile drive from where it was snatched.

An anonymous 911 call alerted cops to the body, which was dumped in an alley backing several abandoned homes, CBS News Chicago said.

It was uncovered, suggesting the crook had removed it from the body bag it had been in, the local outlet said.

“The heck — they gone stole a body?” one shocked neighbor told the outlet, saying she felt “sorry” for relatives of the dumped dead man.

It was not immediately clear how the van was swiped, nor if the crook knew that a body likely would be in the back.

However, Rockford police released images of a suspect for the theft, showing a man dressed all in black — including a hoodie — apart from white gloves.

He is wanted for stealing the van as well as abuse of a corpse for moving the body without authorization, the CBS station said.

The funeral home did not return requests for comment, the local station said. 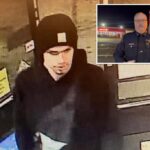 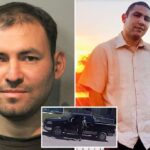