A Colorado man who placed explosives that failed to go off inside a Jehovah’s Witnesses worship hall before he fatally shot his wife and himself on Christmas is suspected of causing an earlier explosion at a different building, according to police.

Thornton police revealed more details about the actions of gunman Enoch Apodaca leading up to the apparent murder-suicide Sunday morning including how he walked into the International Brotherhood of Electrical Workers Local 68 building with a bucket only for an explosion to go off shortly after he left.

No one was hurt in the explosion because the building was closed and empty, police said.

A year before the shooting and explosion, a representative from Apodaca’s former job at Sturgeon Electric Company said Apodaca threatened to a union rep that he would shoot his wife and the union rep, and then said he “will come after the people responsible” after he and his wife lost their jobs.

The startling accusation, first reported by the Denver Post, came in an application for a protection order that also noted Apodaca was fired in June 2021, though it was unclear why.

Apodaca, 46, and his wife, Melissa Martinez, 44, then reached the Kingdom Hall of Jehovah’s Witnesses in Thornton around 9 a.m. Sunday where Apodaca instructed his wife to back a truck up to a window before he shattered the glass with a hammer, police said.

He then put explosive devices inside, according to police, before he shot Martinez in the back of the head with a shotgun and then killed himself.

Only two congregants were inside when the explosive devices were placed there, police said. One of the devices appeared to start a fire, but was quickly put out with an extinguisher, Thornton police said.

None of the devices went off, but a bomb technician reported that one of them almost did before it malfunctioned or was extinguished, police said.

The probe also indicated that both Apodaca and Martinez were former members of the Jehovah’s Witnesses congregation, and the night before the shooting, Apodaca expressed interest in returning, police said.

He was directed to speak with Kingdom Hall elders.

No explosives were found in the couple’s house, and instead personal belongings were apparently laid out and marked for specific family members to receive.

The Denver Post also reported Wednesday that police from a nearby Colorado town received seven calls to respond to Apodaca’s home since September 2021. One of the calls reportedly on Sept. 13, 2021 warned police Apodaca was threatening violence, using drugs and withdrawing from his family after the couple lost their jobs. 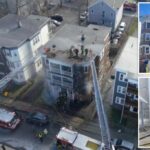 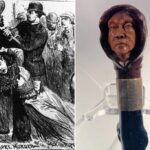 Jack the Ripper only known facial composite found in archives