Chechen leader Ramzan Kadyrov has bragged about sending his three teenage sons to fight for Russia on the front lines of the Ukraine war — even as he pushes for the use of nuclear weapons.

The strongman leader, a key ally of warmongering President Vladimir Putin, said in a Telegram post that sons Akhmat, 16, Eli, 15, and Adam, 14, were “ready to use their skills” to defend the “Motherland.”

“I’m not kidding,” he said alongside a video of the teens smiling while firing from tanks, machine guns and various rocket launchers.

“The time has come to show themselves in a real fight, and this is their desire,” he insisted, saying it filled him with pride.

“Soon they will go to the frontline,” he said — hours after pushing for “low-yield nuclear weapons” to be used on some of those battlegrounds.

The Prada-wearing warlord‘s video showed the boys in camouflage clothing and dark glasses, smiling and giving thumbs-up as they fire a variety of war machinery to a soundtrack of video-game-like music.

“Their military training began a long time ago, almost from the earliest age,” Kadyrov wrote.

He insisted that the “main goal of any father” is to teach his offspring “to protect the family, people and [the] Fatherland.”

“If you want peace, prepare for war!” he wrote.

Just how far he is willing for that war to go also became clear Monday as he decried Moscow’s humiliating withdrawal from the town of Lyman, which took weeks to gain control of earlier this year.

“In my personal opinion, more drastic measures should be taken, up to the declaration of martial law in the border areas and use of low-yield nuclear weapons,” Kadyrov also wrote on Telegram Monday.

Kremlin spokesman Dmitry Peskov on Tuesday hailed the “heroic contributions” of the Chechen leader — while downplaying his call for nuclear warfare as being made in “a very emotional moment.”

“Even at difficult moments, emotions should still be excluded from any assessments,” Peskov added. 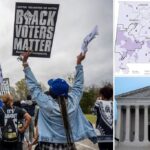 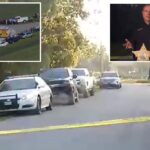